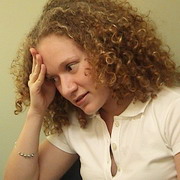 Women suffer much more often
from MS than men © SXC

Of the first group, 77 people developed MS by 2005. In the second group, 292 people developed the disease by 2004. "The risk of MS is particularly high among young women, and the difference in the number of cases is consistent with the different ages of women in the two groups at the beginning of the MS follow-up," said study author Professor Trond Riise, with the University of Bergen in Bergen, Norway.

After considering factors such as age, ethnicity, latitude of birth, body mass at age 18 and smoking, the study found that severe stress at home did not increase the risk of developing MS. There was also no significant increased risk in developing MS among those who reported severe physical or sexual abuse during childhood or adolescence.

"This rules out stress as a major risk factor for MS. Future research can now focus on repeated and more fine-tuned measures of stress," said Riise, who conducted the research as a visiting scholar at the Harvard School of Public Health.


- More about the American Academy of Neurology at: www.aan.com