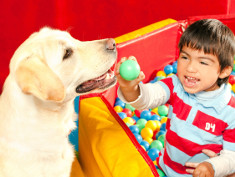 Therapy dogs must have a high tolerance level towards children, adults and other animals; © Jose Louis Stephens/panthermedia.net

Animals exert positive effects on humans. This fact has been proven scientifically and is used increasingly often for specific therapeutic purposes. Scientists at the Vetmeduni Vienna investigated how therapy dogs feel in a therapy setting and how one can create a largely stress-free situation for the animals.

The current study shows that, during group therapy, dogs are not subjected to greater stress than they are during their leisure time. Prerequisites for this purpose are the voluntary involvement and self-determinism of the dogs.

So-called animal-assisted therapy is being used increasingly often to treat physical and mental diseases in man. "For stressed persons, animals may serve as ‘social ice-breakers’ and thus motivate them to enroll in therapy in the first place," says Lisa Maria Glenk, the lead author of the study. Scientific investigations on animal-assisted therapy do exist, but these have been largely confined to studying the effects of such therapy on man.

Lisa Maria Glenk conducts research at the Department of Comparative Medicine at Messerli Research Institute. She is a pioneer in the research of animal perspectives in animal-assisted therapy with dogs. Together with colleagues at the University of Vienna and the Karl Landsteiner Institute of Neurochemistry, Neuropharmacology, Neurorehabilitation and Pain Treatment in Mauer-Amstetten, Glenk investigated the quality of life of the four-legged co-therapists. "We lack widely applicable standards for professional use of animals in therapy. We wish to establish these standards. When animals are subjected to stress during work, it may have negative consequences on their psychological and physical health. When the animals are safe, it eventually benefits human beings as well", says the natural scientist Glenk.

Trained therapy dogs are not subjected to greater stress during therapy than they are on their days off from work. For this purpose Glenk investigated five trained and experienced therapy dogs. The dogs were regularly present during group therapy with drug-addicted persons and two therapists. Glenk used saliva samples to determine whether the therapy periods were stressful for the animals. In saliva samples taken from the dogs at various time points during and after group therapy, as well as at various time points during their leisure time, the scientists found cortisol, which is an indicator of stress levels in dogs. The scientists also documented the behavior of the dogs on video film.

The results provide important data, says Glenk: "Therapy dogs are not subjected to stress during this type of therapy work." In a previous study Glenk had shown that therapy dogs that operate without a leash have lower cortisol levels. Accordingly, leashed dogs involved in animal-assisted therapy with psychiatric patients are less relaxed than those who can move freely while in action. "Thus, it depends on whether the dogs can move freely, i.e. whether they are not on a leash and are permitted to leave the room at any time. These conditions were present during the group therapy. The dogs could also drink at any time and could move freely in the room," says Glenk.

When therapy dogs feel uncertain or overwhelmed, they may develop symptoms like hair loss, scaling, biting the leash, shaking the body, yawning, licking their lips, panting, or diarrhea. More subtle abnormalities include refusal to eat, avoidance of eye contact with humans, or reduced attention and concentration abilities. Dog owners should take acute stress signals during therapy seriously and should remove their dogs from the respective situation.

Glenk recommends regular supervision for therapy dogs. People in psychosocial professions are accustomed to supervision as a mental hygiene measure during which difficult experiences can be processed. With supervision of animals, veterinary medicine specialists skilled in behavior research would be able to detect individual abnormalities early in therapy dogs.

More about the University of Veterinary Medicine, Vienna at: www.vetmeduni.ac.at