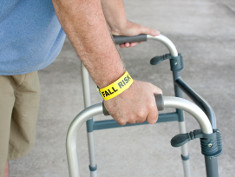 Any stressful life event was associated with a 41 percent increase in risk of fall; © A. Schmidt/panthermedia.net

A study of around 5,000 older men has shown that stressful life events such as death of a loved one, or serious financial problems, significantly raised the risk of falls in the year following the incident.

Howard A. Fink of the VA Medical Center in Minneapolis and colleagues conducted a study of 5,994 community-dwelling men over the age of 65 who were enrolled in the Osteoporotic Fractures in Men (MrOS) study in six locations across the United States. 5,125 participated in a second study visit and answered questions on stressful life events in the prior year. A further subset of 4,981 men reported complete data on falls for one year after the second visit.

During the second visit, participants were asked their marital status, and if widowed, their spouse’s date of death. They were also asked to report occurrence of any of the following stressful life events: serious illness or accident of wife/partner; death of other close relative or close friend; separation from child, close friend, or other relative on whom the participant depended on for help; loss of pet; given up important hobby or interest; serious financial trouble; move or change in residence. Following the second visit, the participants were contacted every four months for one year regarding falls or fractures. Any fractures were confirmed by central review of radiography reports. Overall response rates exceeded 99 percent.

In age-adjusted analyses, any stressful life event was associated with a 41 percent increase in risk of fall, and a nearly two-fold increase in risk for multiple falls in the following year. However, there was no statistically significant increase of risk for fractures.

In the paper, the authors discussed possible reasons for this association. One potential explanation, based on previous studies, is that stressful events trigger a neurohormonal response, causing stress hormones to be released, leading to falls and other adverse health events. Some data suggest that inflammation – a potential indicator of physical stress – could lead to a loss of muscle mass and impaired physical function. Or it could be that sudden emotions, triggered by a stressful event, could impact balance or visual attention, leading to a fall.

The study does have some limitations: because the recall of stressful life events and fall were self-reported, they could be susceptible to error. Secondly, self-reported events may not be equally stressful to all participants, and no data were available to estimate participants’ resiliency.

Fink concluded: “Further studies are needed to confirm our findings and to investigate the mechanism underlying this association. Additional studies may explore whether clinical screening of older men with recent stressful life events for fall reduction interventions will reduce falls.”