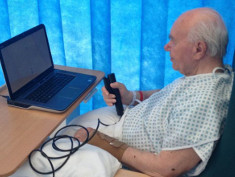 A majority of stroke patients have problems paying attention and could be helped by brain-training computer games, a new study suggests.

Researchers at Imperial College London found that problems such as difficulty filtering out distractions, difficulty following instructions, and reduced alertness are much more common in stroke patients than doctors realize.

Their study showed that brain scans and bedside tests can be used to diagnose these three types of attention problems, each of which could be addressed with computer games tailored for the patient’s requirements.

An estimated 150,000 people in the UK have a stroke each year. It can cause a wide range of effects on the mind and body, including problems with memory, attention and speech; emotional problems and physical disability.

The study involved 110 patients being treated at Charing Cross Hospital, a major centre for stroke care in west London. Five of them were already diagnosed with a serious attention disorder called neglect, but computerized tests showed that over half of them had attention problems that hadn’t been recognized.

The researchers suggest that doctors could use brain scans to predict what type of problem a stroke patient would be likely to have. Computerized tests could then confirm the diagnosis, and the patient could be offered therapy based on their individual condition.

“We found that more than half of stroke patients have some form of attention problem, and these may be missed by routine bedside examinations,” the study’s senior author, Paul Bentley, from the Department of Medicine at Imperial College London, said. “We’ve shown that specialized computer games are very sensitive at picking up deficits in stroke patients. They can also be tailor-made for each patient to rehabilitate them for the specific deficit they show. These findings therefore suggest a new strategy by which stroke treatments can be personalized depending on information gained from patients’ brain scans.”

Patients might also benefit from tailored drug therapies, Bentley said. The three types of attention problems the researchers found correspond to three networks in the brain controlled by different brain chemicals. Drugs that modulate the release of these chemicals are already available for use in other neurological conditions, which the researchers suggest exploring as specific treatments for patients with different types of impairments.

The study was funded by the National Institute for Health Research Imperial Biomedical Research Centre.

More about the Imperial College London at: www.ic.ac.uk