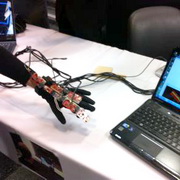 This special glove helps stroke
patients learn as they play and cuts
down on hospital visits too;
© Laurie Devine

People who have strokes are often left with moderate to severe physical impairments. Now, thanks to a glove developed at McGill University, stroke patients may be able to recover hand motion by playing video games.

The Biomedical Sensor Glove was developed by four final-year McGill Mechanical Engineering undergrads under the supervision of Professor Rosaire Mongrain.

It is designed to allow patients to exercise in their own homes with minimal supervision, while at the same time permitting doctors to monitor their progress from a distance, thus cutting down on hospital visits and costs. Patients can monitor their progress thanks to software, which will generate 3D models and display them on the screen, while at the same time sending the information to the treating physician.

The glove was developed by the students in response to a design request from the start up company Jintronix Inc. The students met with company representatives once a week for several months to develop the glove, which can track the movements of the wrist, the palm and the index finger using several Inertial Measurement Units.

Although similar gloves currently exist, they cost approximately $30,000. By using more accurate and less expensive sensors, the students were able to develop a glove that currently costs $1000 to produce. Jintronix Inc. has submitted the project to Grand Challenges Canada, which is an independent not-for-profit organisation dedicated to improving the health and well-being of people in developing countries, in the hopes that they will receive funding for further development.


- More about the McGill University at www.mcgill.ca