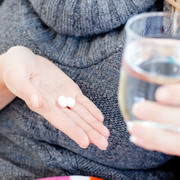 The risk of stroke associated with
trans fat intake was lower among
women taking aspirin;
© panthermedia.net/Wavebreakmedia

Older women whose diets include a substantial amount of trans fats are more likely than their counterparts to suffer an ischemic stroke, a new study of the University of North Carolina at Chapel Hill shows.

However, among women who took aspirin over an extended period of time, researchers found no association between trans fat consumption and stroke risk – suggesting that regular aspirin use may counteract trans fat intake's adverse effect on stroke risk among women.

Trans fat is generally created in the food production process and is found in commercially prepared foods, including many shortenings, cake mixes, fried fast foods, commercially baked products, such as doughnuts, cakes and pies, chips, cookies and cereals.
Researchers from the UNC Gillings School of Global Public Health studied women who were enrolled in the Women's Health Initiative Observational Study. From 1994 to 2005, 1,049 new cases of ischemic stroke were documented.

Women who consumed the highest amount of trans fat also were more likely to be smokers, have diabetes, be physically inactive and have lower socioeconomic status than those who consumed the least trans fat, the study showed.

"Our findings were contrary to at least two other large studies of ischemic stroke," said Ka He of the UNC public health school. "However, ours was a larger study and included twice as many cases of ischemic stroke. Our unique study base of older women may have increased our ability to detect the association between trans fat intake and ischemic stroke among non-users of aspirin." He said aspirin may lower the risk of ischemic stroke because of its anti-inflammatory and anti-platelet clumping properties.

"Our findings highlight the importance of limiting the amount of dietary trans fat intake and using aspirin for primary ischemic stroke prevention among women, especially among postmenopausal women who have elevated risk of ischemic stroke," said lead author Sirin Yaemsiri.


- More about the University of North Carolina at Chapel Hill at: www.unc.edu