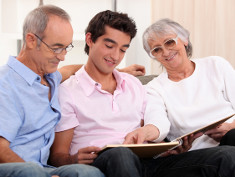 A new study shows that grandparents and grandchildren have real, measurable effects on each other's psychological well-being long into grandchildren's adulthood.

"We found that an emotionally close grandparent-adult grandchild relationship was associated with fewer symptoms of depression for both generations," said Sara M. Moorman, an assistant professor in the Department of Sociology and the Institute on Aging at Boston College. "The greater emotional support grandparents and adult grandchildren received from one another, the better their psychological health."

The study also revealed that giving tangible support to or receiving it from their grandchildren affected the psychological well-being of grandparents but not grandchildren. Tangible support, also called functional solidarity or instrumental support, includes anything from rides to the store and money to assistance with household chores and advice.

"Grandparents who experienced the sharpest increases in depressive symptoms over time received tangible support, but did not give it," said Moorman, who co-authored the study with Jeffrey E. Stokes, a PhD candidate in sociology at Boston College. "There's a saying, 'It's better to give than to receive.' Our results support that folk wisdom – if a grandparent gets help, but can't give it, he or she feels badly. Grandparents expect to be able to help their grandchildren, even when their grandchildren are grown, and it's frustrating and depressing for them to instead be dependent on their grandchildren."

Comparatively, the researchers found that grandparents who both gave and received tangible support experienced the fewest symptoms of depression over time. "Therefore, encouraging more grandparents and adult grandchildren to engage in this type of exchange may be a fruitful way to reduce depression in older adults," said Moorman.

In their study, the researchers used data from the Longitudinal Study of Generations, a survey of 3- and 4-generation U.S. families that included seven waves of data collection between 1985 and 2004. The sample was comprised of 376 grandparents and 340 grandchildren. The average grandparent was born in 1917 and the average grandchild in 1963, making them 77 years old and 31 years old, respectively, at the midpoint of the study in 1994.

In terms of the study's implications, Moorman said her research suggests that efforts to strengthen families shouldn't stop with the nuclear family or focus only on families with younger children. "Extended family members, such as grandparents and grandchildren, serve important functions in one another's daily lives throughout adulthood," she said.

The study also indicates that helping older people remain functionally independent may aid their psychological well-being, according to Moorman. "Most of us have been raised to believe that the way to show respect to older family members is to be solicitous and to take care of their every need," Moorman said. "But all people benefit from feeling needed, worthwhile, and independent. In other words, let granddad write you a check on your birthday, even if he's on Social Security and you've held a real job for years now."

More about the American Sociological Association at: www.asanet.org