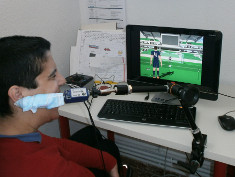 This prototype will become a free software created to suit people with cerebral palsy; © Asociación RUVID

Final year student in the University of Alicante's Multimedia Engineering degree Roberto Gómez has designed a soccer game adapted for people with cerebral palsy which is operated with a foot switch, a push rod head switch and a hand switch. A new tool used for the first time by the Cerebral Palsy Association of Alicante, APCA, and which allows any player to have equal access with different physical conditions.

So far, this is a prototype on which student Roberto Gómez as well as lecturers and co-directors of the project, Rafael Molina and Carlos Villagra, have worked since last November, and in a few months it will become a free software created to suit people with cerebral palsy.

The APCA team stated that the game empowers strategic planning, perceptual ability, enhances spatiotemporal organisation and speeds up physical response", so it can be used by any disabled person. Furthermore, it meets the recreational component of any game, enhances physical, emotional, and self-improvement motivation of this group.

According to the UA student’s experience, this final year project has been warmly welcomed by the Association since the demo was designed based on their needs and preferences. In fact, APCA boys and girls themselves have been the ones who chose the interface theme and have given their opinion on how to improve the tool.

This is a game with well thought-out software designed for people with cerebral palsy, with a simple interface, free from distractions, allowing all participants to focus on the essential information. Technically, the greatest difficulty has been to filter out the unintended clicks of players and replace the traditional menu to choose a new game, player etc., by automatic options scanning, Roberto Gomez said.

Until its release, only a small group of users had interacted before with a commercial game with the access limitations that this entails, so it is the first time that the Centre is involved in the use of such resources.

The features of this game allow the group to have the same opportunities regardless of their physical conditions, so they only need to have access to any type of switch (foot, joystick, rod, ...). "All these factors contribute to the learning opportunities, interaction and entertainment of this game," APCA professionals emphasised.

During the various experiments and tests, users have played both individually and in groups and it has been very welcomed amongst them, who stated their intention to play it more often. In this sense, the team of professionals has proven that users are more enthusiastic when playing in a group, since it allows them to enjoy leisure by interacting with peers and competing among them.

The project started from the initiative of lecturers Rafael Molina and Carlos Villagra in order to engage their students in professional jobs that respond to real needs of society. "It is the first time a student has accepted the challenge and it has been a very rewarding experience so we will prepare new proposals for our students next year."