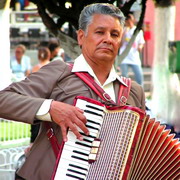 While much research has been done to determine the cognitive benefits of musical activity by children, this is the first study to examine whether those benefits can extend across a lifetime.

"Musical activity throughout life may serve as a challenging cognitive exercise, making your brain fitter and more capable of accommodating the challenges of aging," said lead researcher Brenda Hanna-Pladdy from the Emory's Department of Neurology. "Since studying an instrument requires years of practice and learning, it may create alternate connections in the brain that could compensate for cognitive declines as we get older."

Cognitive performance was measured by testing brain functions that typically decline as the body ages, and more dramatically deteriorate in neurodegenerative conditions such as Alzheimer's disease.

"Based on previous research and our study results, we believe that both the years of musical participation and the age of acquisition are critical," Hanna-Pladdy says. "There are crucial periods in brain plasticity that enhance learning, which may make it easier to learn a musical instrument before a certain age and thus may have a larger impact on brain development."

The preliminary study was correlational, meaning that the higher cognitive performance of the musicians could not be conclusively linked to their years of musical study. Hanna-Pladdy, who has conducted additional studies on the subject, says more research is needed to explore that possible link.


- More about the Emory University at: www.emory.edu