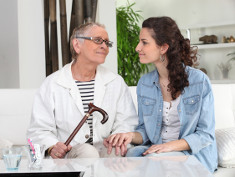 Providing care for a chronically ill or disabled family member increases the life expectancy of the caregiver;
© auremar/panthermedia.net

Researchers found that providing care for a chronically ill or disabled family member not only fails to increase health risk, but also is associated with a nine-month extension in life expectancy over the six-year period of the study.

According to the Commission on Long-Term Care, family caregivers – the backbone of America's long-term care system – provide an estimated $450 billion in care and immeasurable support every year. An aging America means more demand for caregivers who help care for the elderly, but a looming shortage of caregivers could endanger many of the most vulnerable.

"Taking care of a chronically ill person in your family is often associated with stress, and caregiving has been previously linked to increased mortality rates," says first author, David L. Roth, director of the Johns Hopkins University Center on Aging and Health. "Our study provides important new information on the issue of whether informal family caregiving responsibilities are associated with higher or lower mortality rates as suggested by multiple conflicting previous studies."

Roth and his colleagues conducted an analysis of information gathered originally in the Reasons for Geographic and Racial Differences in Stroke (REGARDS) study. That study, sponsored by the National Institutes of Health, looked at information from over 30,000 people, aged 45 years or older, to assess the excess stroke risk among African-Americans living in the nation's Southeastern "stroke belt." Roth's team studied whether 3,503 family caregivers from the REGARDS study showed differences in rates of death from all causes over a six-year period compared with a matched sample of 3,503 non-caregivers. The groups were matched using a measure based on 15 common variables that included demographics, health history and health behaviors.

According to Roth, theirs is the first study of its kind to show mortality effects for caregivers using this "propensity score matching" approach. "Although our findings are not entirely new, the statistical methods we used were unique and innovative and our large national database, which included a large number of African-American caregivers, is what really sets our research apart," he said.

"In many cases, caregivers report receiving benefits of enhanced self-esteem, recognition and gratitude from their care recipients. Thus, when caregiving is done willingly, at manageable levels, and with individuals who are capable of expressing gratitude, it is reasonable to expect that health benefits might accrue in those situations," added Roth.

Roth cautioned that his team's analysis had its limitations, and could not rule out the possibility that some subgroups of caregivers might be more vulnerable to increased risk of death. The limitations were mostly due to a lack of information on the functional status of the care recipients and the specifics of the care being provided.

"If highly stressful situations can be avoided or managed effectively, caregiving may actually offer some health benefits for both the care recipients and the caregivers, including reduced risk of death for those providing care," Roth said. "Negative public health and media portrayals of the risk of family caregiving may do a disservice by portraying caregiving as dangerous, and could potentially deter family members from taking on what can be a very satisfying and healthy family role. Public discussions of caregiving should more accurately balance the potential risks and gains of this universal family role."

Roth says future research should examine specific group of caregivers. "We need to research adult children who are providing regular care to a disabled parent, because this group is rapidly growing in size in our population, but largely understudied, at least in comparison to spouses," said Roth.