As the linked epidemics of obesity and diabetes continue to escalate, a staggering one in five U.S. adults is projected to have diabetes by 2050. Ground zero for identifying ways to slow and stop that rise is Philadelphia, which has the highest diabetes rate among the nation's largest cities. For public health researchers at Drexel University, it is also a prime location to learn how neighborhood and community-level factors – not just individual factors like diet, exercise and education – influence people's risk. 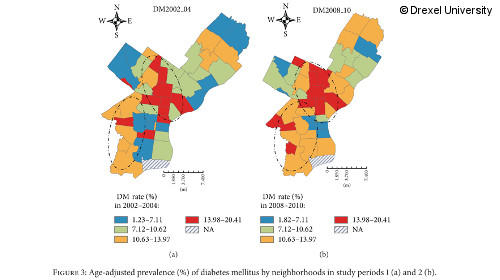 Age-adjusted prevalence (%) of diabetes mellitus by neighborhoods in study 1 (a) and 2 (b); © Drexel University

A new Drexel study adds new insight into the role of the physical and social environment on the risk of diabetes, zip code by zip code throughout the city. The researchers report that age-adjusted prevalence of diabetes in adults aged 18 and older in the city increased significantly between 2002 and 2010. Having diabetes is a strong risk factor for heart disease, even more so in minorities.

Living in a disadvantaged neighborhood may play a critical role in a person's risk of the disease, accounting for about 12 percent of the difference in risk between otherwise-similar groups.

Philadelphia is often referred to as comprising a patchwork of neighborhoods. As a result of this city-wide patchwork, "people who live in the same general area have huge variations in socioeconomic environment," said Longjian Liu, an associate professor and interim chair of the Department of Environmental and Occupational Health in Drexel's School of Public Health. Liu was lead author of the new study. This report was coauthored by Ana E. Núñez, a professor and associate dean for urban health equity, education and research in Drexel's College of Medicine. "Philadelphia also has the worst health status among 67 counties in Pennsylvania."

The communities people live in contribute to wellness or illness. To evaluate the health impact of disadvantaged urban communities, Liu and Núñez developed an indicator of people's physical and social environment (PSE) based on their answers to certain questions on a large region-wide health survey. These questions asked about the availability of healthy food, use of local recreational facilities, helpfulness of neighbors and other factors, in addition to poverty level. The survey also asked more than 17,000 participants who lived in 46 Philadelphia zip codes about personal factors that affected their risk of diabetes. These questions included whether they were overweight or obese, their physical activity, fruit and vegetable intake, age, sex, race/ethnicity and smoking status.

Using statistical models, the researchers determined that about 12 percent of the risk of diabetes correlated with neighborhood PSE factors when adjusted for respondents' age and sex – meaning they would expect diabetes rates to drop by 12 percent if the neighborhood environment were improved. Another nearly 12 percent of risk correlated with education when adjusted for respondents' age and sex. Excess weight (overweight or obese) and race/ethnicity still remained larger contributors to the odds of diabetes.

"Too often, we focus exclusively on the individual in solving the problem. Here we found that we also need to focus on the healthiness of the community if we want to improve overall health and ultimately decrease health care costs," Núñez said.

"We want to stop the epidemic of diabetes and eliminate health disparities in communities," Liu said. He noted that although the risk of diabetes develops from an interaction between genes, lifestyle and environmental factors, the disease can be largely prevented by influencing its modifiable risk factors. To do so, we need to critically look at health policies that reduce risk at a larger community level. Working towards improving the health quality of an entire neighborhood or city shows promise in helping to reduce the risk of disease.