Studying the Use of Mobile Phones among Elderly 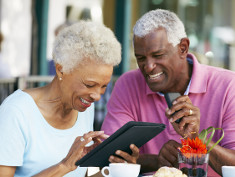 Doris Bohman, senior lecturer in caring sciences at Blekinge Institute of Technology, BTH, has received a scholarship to, along with fellow researchers from the University of Oxford in the United Kingdom and North-West University in South Africa, study how elderly people in South Africa use mobile phones and the role the mobile phone plays in the South African society.

Thanks to an international scholarship from the Swedish Research Council for Health, Working Life and Welfare, she can spend time at the very highly ranked University of Oxford. Together with researchers from the Oxford Institute of Population Ageing and the North-West University in South Africa, she will study how the elderly in South Africa are using mobile phones in their everyday life.

“The mobile phone plays a very important role in today's South Africa. A lot of elderly people use mobile phones to a greater extent than elderly in Sweden. Many underprivileged with little resources share a mobile phone to get access to it, and many are open to new technologies,” Doris Bohman says.

The next step in the research project is to test mobile applications related to preventive health and treatment of disease in South Africa. According to the UN the mobile phone can be an important weapon in the war against HIV and AIDS in Africa.

Doris Bohman has been interested in the situation of the elderly in South Africa for many years. Among other things she has conducted an ethnographic study in which she followed a group of elderly people, in their daily lives for several years in one of South Africa's townships. She interviewed both them and their families, individually and in groups. This work resulted in a doctoral thesis in 2008.

More about the Blekinge Institute of Technology at: www.bth.se