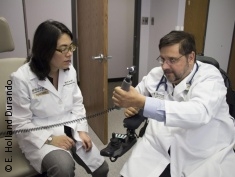 A pioneering surgical technique has restored some hand and arm movement to patients immobilized by spinal cord injuries in the neck, reports a new study at Washington University School of Medicine in St. Louis.

Like railroad switchmen, the focus is on rerouting passageways; however, instead of trains on a track, the surgeons redirect peripheral nerves in a quadriplegic's arms and hands by connecting healthy nerves to the injured nerves. Essentially, the new nerve network reintroduces conversation between the brain and the muscles that allows patients, once again, to accomplish tasks that foster independence, such as feeding themselves or writing with a pen.

The researchers assessed outcomes of nerve-transfer surgery in nine quadriplegic patients with spinal cord injuries in the neck. Every patient in the study reported improved hand and arm function. The study is published in the October issue of the American Society of Plastic Surgeons' journal Plastic and Reconstructive Surgery.

"Physically, nerve-transfer surgery provides incremental improvements in hand and arm function. However, psychologically, these small steps are huge for a patient's quality of life," said the study's lead author, Ida K. Fox, MD, assistant professor of plastic and reconstructive surgery. "One of my patients told me he was able to pick up a noodle off his chest when he dropped it.' Before the surgery, he couldn't move his fingers. It meant a lot for him to clean off that noodle without anyone helping him."

Soft nerve bundles form the human spinal cord, which acts as the body's control tower by communicating to the brain physical activities both large and small. The cervical spinal cord, in the neck, is comprised of seven vertebra denoted as C1 through C7.

Ultimately, medical professionals hope to discover a way to restore full movement to the estimated 250,000 people in the United States living with spinal cord injuries. More than half of such injuries involve the neck. However, until a cure is found, progress in regaining basic independence in routine tasks is important.

Indeed, one of the most humbling effects of spine damage is the inability to manage bladder or bowel functions. "People with spinal cord injuries cannot control those functions because their brains can't talk to the nerves in the lower body, and they often can't feel the need to go to the bathroom," said Fox, who performs surgeries at Barnes-Jewish Hospital?. "Patients often can't insert a catheter to empty their bladders or insert a suppository for bowel movement and have to rely on help from a caregiver. But after this surgery, one of my patients was able to independently catheterize himself, which he hadn't been able to do since his accident over a decade ago. This boost in privacy and personal space restores a significant amount of dignity."

The procedure allowed a St. Louis primary care physician and a father of eight to feed himself with a fork, write with a pen, look into patients' ears with an otoscope and drive his kids to activities. In 2012, Michael D. Bavlsik, MD, lost the ability to use his left hand and extend his left elbow while he, his son and other Boy Scouts were on a trip in Minnesota and his van collided with a boat and a trailer. None of the boys was severely injured, but the accident left Bavlsik a quadriplegic. He now moves about in a motorized wheelchair.

"Nerve-transfer surgery has been very successful in helping me because it restored triceps function and improvement in my grip," said Bavlsik, an assistant professor of clinical medicine at the School of Medicine. "I am extremely grateful for this surgery."

Surgeons at Washington University pioneered nerve-transfer surgery. Developed about 25 years ago by the study's senior author, Susan E. Mackinnon, MD, director of the Division of Plastic and Reconstructive Surgery at the School of Medicine, the technique initially was performed to restore movement in the extremities of patients who had injured peripheral nerves and lost the ability to move a foot or an arm.

But in the past five years, the same technique has been used to restore limited movement to patients with spinal cord injuries. Quadriplegics from Colorado, Michigan and Arizona, among other states, have traveled to St. Louis for the surgery. The operation can be performed even years after a spinal cord injury. It usually takes four hours, and most patients go home the next morning.

Since surgeons connect working nerves in the upper arms to a patient's damaged nerves in their arms and hands, the technique targets patients with injuries at the C6 or C7 vertebra, the lowest bones in the neck. It typically does not help patients who have lost all arm function due to higher injuries in vertebrae C1 through C5.

Bypassing the spinal cord, surgeons reroute healthy nerves sitting above the injury site, usually in the shoulders or elbows, to paralyzed nerves in the hand or arm. Once a connection is established, patients undergo extensive physical therapy to train the brain to recognize the new nerve signals, a process that takes about 6-18 months.

"The gains after nerve-transfer surgery are not instantaneous," said Mackinnon, director of the School of Medicine's Center for Nerve Injury and Paralysis, and the Sydney M. Shoenberg Jr. and Robert H. Shoenberg Professor of Surgery. "But once established, the surgery's benefits provide a way to let individuals with spinal cord injuries improve their daily lives."

Another patient benefiting from the nerve-transfer technique is a 72-year-old right-handed man who had the surgery two years after he suffered a cervical spinal cord injury. The doctors took healthy tissue from the patient's upper arm, connected it to a paralyzed nerve that controlled his ability to pinch and then plugged it into a working nerve that restored the man's ability to flex his thumb and index finger. This allowed him to feed himself and to hold a water bottle to maintain hydration, which, in turn, reduced his risk of developing urinary tract infections and has bolstered his overall health.

"Our innovations to address spinal cord injuries came directly from a quarter century of nerve-transfer work in nerve injury," Mackinnon said. "We want to continue building our expertise in this area very carefully. While the surgery itself can be relatively straightforward, the decision-making is complicated. We want to encourage people with spinal cord injury to consider this option when so little is often offered or made available."