Survey Tracks “55+” Attitudes About the Environment 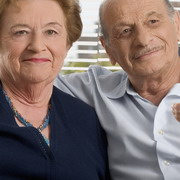 The survey aims to identify
difficulties that people over the
age of 55; © panthermedia.net/
JCB Prod

An international survey led by Simon Fraser University's Gerontology Research Centre (GRC) and the University of York's (UK) Stockholm Environment Institute (SEI) is tracking attitudes about the environment among those over 55.

The EnviroSurvey55, which involves a consortium of organisations, will provide a snapshot of current attitudes of older people to such environmental issues as climate change.

The survey aims to identify difficulties that people over the age of 55 face in personally taking action to reduce their environmental footprints.

Gloria Gutman of GRC says: "Evidence shows that older people can be disproportionately affected by environmental problems such as air pollution, climate change-related heat waves and other natural disasters. It is important that seniors around the world make their voices heard so that steps will be taken to better prepare them, and to meet their needs when they cannot always do it themselves."

Gary Haq of SEI says: "The survey will provide insight into the level of understanding and concern about environmental issues in this demographic group, including differences that are linked to geography and location. The results of the survey will feed into the policy process and help develop better strategies that address the environmental concerns of an ageing population."

Gutman says: “The EnviroSurvey55 builds on previous studies of older people and the environment and focuses on the vulnerability of this demographic group to the effects of a changing climate, and the need for new approaches that are sensitive to personal circumstances in later life.”


- More about the Simon Fraser University at: www.sfu.ca
- Click here for the survey: www.envirosurvey55.com