Switzerland best place in the world for older people to live 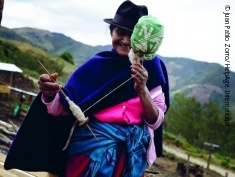 The Global AgeWatch Index assesses the social and economic well-being of the older population in 96 countries around the world; © Juan Pablo Zorro/ HelpAge International

Switzerland is the best place in the world for older people to live, closely followed by Norway and Sweden, according to a new report from HelpAge International, working in partnership with the University of Southampton.

The Global AgeWatch Index assesses the social and economic wellbeing of the older population in 96 countries around the world. The Index represents 91 per cent of the world's population aged 60 and over, amounting to some 901 million people. It measures the lives of older people in four key areas: income; health; education and employment and the enabling environment.

The report highlights that:
• Switzerland (1) tops the Index, alongside Norway (2), Sweden (3), Germany (4) and Canada (5). The UK (10) is also among the top 10 this year, along with USA (9).
• Apart from Japan (8) all the top 10 countries are advanced countries in Western Europe and North America. Afghanistan (96) is ranked last.
• Countries investing in improving the lives of older people are at the top of the Index. They are implementing policies which promote social pensions, universal healthcare and enabling physical and social environments for older people.
• All the world's regions are represented in the lowest quarter, showing that improvements in lives of older people are required in countries across the world.
• African countries make up half of those with low income security rankings and poor health results – requiring more research and policy interventions in this region than any other.
• Greece (79), Venezuela (76) and Turkey (75) are in a similar position to sub-Saharan African and Asian countries.

Professor Asghar Zaidi, of the Centre for Research on Ageing at the University of Southampton, led the development of the Index, working alongside HelpAge International. He comments: "This Index is vital in representing the lives of older people in countries around the world as it enables us to compare not just their pension income and health but also the age friendly environments in which they live. The Index has also shown that a number of countries still lack vital statistics of older people and we would like to see them feature in the report in the future.

"The new post-2015 UN Sustainable Development Goals offer us a great opportunity to start building a better future for all ages by framing agendas and public policies over the next 15 years. If older people are to be truly represented in these goals, we need to see more data broken down by age and gender - to help us more effectively understand and address needs specific to this age group."

By the time the Sustainable Development Goals reach their fruition in 2030, the proportion of people aged 60 and over globally is predicted to rise to 16.5 per cent, up to three-quarters of whom will live in developing countries.

"The Index is a step on the road to people fulfilling their potential at every stage of life," said Toby Porter, Chief Executive of HelpAge International. "Today, in all countries of the world, the proportion of older people is growing. By 2050, 46 of the 96 countries in the Index will have 30 per cent or more of their populations aged 60 and over. We have just 35 years to prepare."

The combination of a lifetime of gender discrimination, combined with inequality in old age, can have a devastating effect on older women. Globally 46.8 per cent of women aged 55 to 64 are economically active, compared with 73.5 per cent of men. In addition, women usually earn less than men, so opportunities to save for later life are limited, increasing their risk of poverty in old age.

Evidence from the Global AgeWatch Index shows governments investing in population ageing, and that are planning for the future, are at the top of the Index. These countries score highly on all four domains. They are carrying out research, resourcing and implementing policies which support wellbeing i.e. social pensions, accessible health care, flexible working, life-long learning and creating an enabling environment for all ages. This approach, more common in high income countries, is also apparent in some middle-ranking countries such as Chile (21), Argentina (31) and Mauritius (42).

More about the University of Southampton at: www.southampton.ac.uk
Here you can download the Global AgeWatch Index 2015, case studies, photos and infographics: