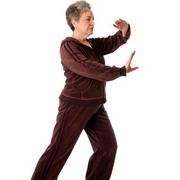 A study of Gary Brosvic of Rider University, New Jersey has shown that taking part in a Tai Chi exercise programme reduced the number of falls and increased mobility in a group of senior citizens in assisted living in the United States.

Twenty older people (average age 72) in assisted living in the US took part in up to 30 sessions of Tai Chi exercise. They were compared with 20 similar people who did not take part. Those doing the exercise demonstrated significant declines in the likelihood of falling and in the amount of time needed to stand and walk, as well as increases in reach, balance, and the ability to do day-to day activities. Benefits were apparent after as few as 10 sessions. A control group showed no changes until they too joined in the exercise programme.

Those who independently continued with the exercise were judged by medical staff to require the lowest level of physical support while walking, to experience the fewest falls, and to have the greatest balance and reach during the completion of day-to-day living activities.

Falls in older people are a huge problem in the United Kingdom where up to one in three people over the age of 65 fall each year. The findings of this study may have implications for reducing injuries and hospital admissions resulting from falls.


- More about the British Psychological Society (BPS) at: www.bps.org.uk