Taking sightlessness for a spin can harm people's attitudes toward blindness 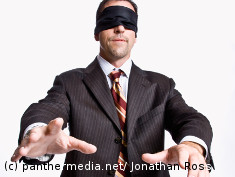 After simulating blindness by having their eyes covered, participants believed people who are blind are less capable of work and independent living; © panthermedia.net/ Jonathan Ross

Using simulation to walk in the shoes of a person who is blind – such as wearing a blindfold while performing everyday tasks – has negative effects on people's perceptions of the visually impaired, according to a University of Colorado Boulder study.

"When people think about what it would be like to be blind, they take from their own brief and relatively superficial experience and imagine it would be really, really terrible and that they wouldn't be able to function well," said Arielle Silverman, who is lead author of the paper and blind.

In one part of the study, after simulating blindness by having their eyes covered, participants believed people who are blind are less capable of work and independent living than did participants who simulated other impairments like amputation, or had no impairment.

The findings, published online in Social Psychological and Personality Science, demonstrate the self-centered nature with which people reflect on other's difficulties.

The findings also show that blindness simulations – typically meant to be bridge-builders resulting in compassion and understanding – can sometimes harm rather than help attitudes.

Silverman became interested in studying the effects of blindness simulations in part because of her own interactions with strangers enthusiastically wanting to help her navigate her way across a street, for example.

Blindness simulations are often used to train teachers and professionals in other fields who are preparing to work with people with visual impairments.

There also are variations on blindness simulations – activities that are implemented with good intentions but that can exploit blindness, said Silverman. These include trust walks – typically used as a group bonding exercise – and blind cafes, where diners are blindfolded and dine in the dark.