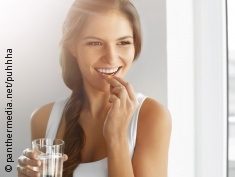 More research is needed to prove that vitamin D can be really beneficial for people with multiple sclerosis; © panthermedia.net/puhhha

Taking a high dose of vitamin D3 is safe for people with multiple sclerosis (MS) and may help regulate the body's hyperactive immune response, according to a pilot study published by Johns Hopkins physicians in the Dec. 30 online issue of Neurology, the medical journal of the American Academy of Neurology.

"These results are exciting, as vitamin D has the potential to be an inexpensive, safe and convenient treatment for people with MS," says study author Peter Calabresi, M.D., director of the Johns Hopkins Multiple Sclerosis Center and professor neurology at the Johns Hopkins University School of Medicine. "More research is needed to confirm these findings with larger groups of people and to help us understand the mechanisms for these effects, but the results are promising."

While researchers are still determining the optimal level of vitamin D in the blood for people with MS, a suggested range of 40 to 60 nanograms per milliliter (ng/ml) has been proposed as a target. Participants taking the high dose of vitamin D reached levels within the proposed target, whereas the group taking the low dose did not reach the target.

"We hope that these changes in inflammatory T cell responses translate to a reduced severity of disease," says Calabresi. "Other clinical trials are underway to determine if that is the case."