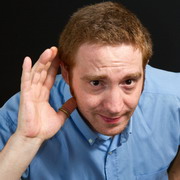 Difficulty hearing is one syptom
of multiple sclerosis;
© panthermedia.net/Luca Santilli

Annoying, frustrating symptoms like difficulty hearing or remembering things can complicate everyday living for multiple sclerosis (MS) patients, but most research to date has focused on the disease's less frequent but more debilitating consequences.

Recently, however, an increasing number of patients have expressed their desire for a better quality of life between relapses, as the body attacks its own central nervous system, which can cause blindness or the inability to use a limb.

"Everyone reacts more strongly to changes that are big rather than subtle changes that occur every day," said Alexander Gow of Wayne State University's Centre for Molecular Medicine.

Approximately 400,000 Americans have MS, and every week about 200 people are diagnosed. Worldwide, it affects about 2.5 million people.

Over time, Gow said, MS patients can lose their ability to focus mentally, forget what they want to do or have difficulty following conversations. But because the causes of MS are still somewhat unclear, he believes part of the reason for the lack of attention to such symptoms may lie in clinicians' inability to offer solutions to patients.

Patients can become extremely depressed or frustrated at their inability to perform daily mental functions, which has led some to undergo drug treatments similar to those used to treat behavioural disorders. However, Gow said, such treatments may not be all that effective for many MS patients.

He believes the immune system attacks that damage or destroy white matter brain cells (oligodendrocytes) and cause the more catastrophic symptoms of MS also destroy cells in the brain's gray matter cells (neurons), where auditory, visual and cognitive functions are based.

"Changes in gray matter could well be associated with emotional outbursts," Gow said. "Cells involved in memory and learning are also being destroyed. Whenever those sorts of changes occur, you almost always see frustration in patients as they try to grapple with the resultant loss in mental capacity.

"That causes them to be upset about not being able to do things, even if they do not know that is what is going on physically. This can also lead to them withdrawing from social settings with family and friends, which deepens the impact of MS."


- More about the Wayne State University at: www.wayne.edu