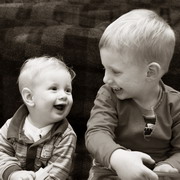 Targeting the core social deficits of autism spectrum disorders (ASD) in early intervention programs yielded sustained improvements in social and communication skills even in very young children who have ASD.

Although some research suggests that ASD may be reliably diagnosed earlier than the current average age of three years, few interventions have been tested in children younger than three.
During the course of typical development, children learn to interact with others in socially meaningful ways. Deficits in such measures are hallmark symptoms of ASD and can severely limit a child's ability to engage in and learn from interactions with others or from the world around them.

The interventions were designed to encourage children to make frequent and intentional efforts to engage others in communication or play. The single difference between interventions was that the IS group received more opportunities for joint attention, affect sharing, and socially engaged imitation. The toddlers were assessed at the start and end of the intervention and again six months later.

Children in both groups made improvements in social, cognitive and language skills during the six-month intervention period. Children who received IS made greater and more rapid gains than those in the non-IS group. The researchers also noted that children in the IS group used their newly acquired abilities with different people, locations, and type of activity. This is noteworthy because children with ASD have particular difficulty doing so. They tend to use new skills mostly within familiar routines and situations.


- More about the NIH/National Institute of Mental Health at: www.nimh.nih.gov