Teaching the blind to draw – and do STEM 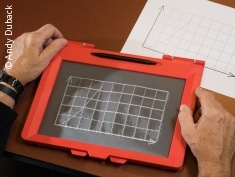 A new printer can convert a standard math worksheet to a raised line version usable by blind students. Using the sketchpad and eraser, students can change, correct and update math and science work; © Andy Duback

University of Vermont start-up company E.A.S.Y. LLC has received a $1 million Phase II Small Business Technology Transfer grant from the National Institutes of Health to develop a commercial prototype for a digital printer that will translate conventional graphics to raised-line versions for the blind they are able to read and interact with.

In concert with the company's other products, the printer will level the playing field for blind and visually impaired students taking math and science courses, which frequently require students to interact with graphics, allowing teachers for the first time to distribute the same interactive worksheets to blind students that sighted students take for granted. Under a Phase I version of the grant, intended to demonstrate product feasibility, the company developed the first working prototype for the printer.

In addition to the printer, the company's product line also includes the inTACT sketchpad for blind users, which converts marks drawn on plastic sheets to raised lines that can be felt, and the inTACT "eraser" that can remove the lines so drawings can be altered.

"E.A.S.Y.'s goal for its product line is to normalize drawing and graphic expression for young blind children," said company co-founder and president Josh Coffee, a 2011 University of Vermont graduate in mechanical engineering. "That's an intrinsic benefit," he said, but also one that clears a path to areas of study and professional opportunity that require graphic literacy, like math and science and STEM fields, generally, which the blind have traditionally been closed off from.

!We're hoping to change the paradigm," he said. "If you're comfortable and competent drawing in elementary school and before, you're less likely to be inhibited from taking geometry in eighth grade or calculus in eleventh grade, or taking STEM courses in college, or pursuing a career as an engineer or an architect."

The sketchpad and eraser, which launched in 2014, are already in use in many schools around the country. But the new printer will greatly enhance their utility and speed adoption.

While it will also print raised-line drawings created on E.A.S.Y's upcoming inTACT digitized sketchpad, the printer's real significance is as a kind of translational interface between conventional graphics-based worksheets for sighted students – like those used in math or science courses – and interactive, Braille-annotated, raised-line versions that teachers could print and distribute to blind students.

"A teacher could simply send a digital file for a conventional worksheet for sighted kids to the printer, and a raised-line graphic version of it, with accompanying Braille, will print out," said E.A.S.Y. co-founder and vice president Mike Rosen, a research associate professor in UVM's College of Engineering and Mathematical Sciences.

Unlike all other Braille-plus-graphics printers on the market at present, the printer will produce its tactile graphics drawings on the same type of plastic drawing sheets used in the sketchpad. These sheets are not just 'read-only'; using the sketchpad and eraser, they allow blind students to add to, alter, edit and complete the drawings produced by the printer – for example to complete homework assignments.

Easily produced interactive worksheets for blind students aren't currently available and will have a powerful educational impact.
"Teachers who work with blind students have been bowled over by how much these tools can revolutionize the way they teach," said Mike Coleman, E.A.S.Y.'s other co-founder and vice president, an associate research professor the College of Engineering and Mathematical Sciences. "They're a game-changer."

The products would also open new possibilities in the workplace, Coleman said, enabling a blind engineer, for instance, to interact with graphics created by colleagues or originate designs others could react to.

"Vote of confidence from NIH and from high profile partners The Phase II grant is a vote of confidence from NIH that E.A.S.Y.'s vision of expanding the horizons of the blind is achievable," said Coffee. Further evidence of its promise, he said, is the list of high-profile organizations serving the blind who are partners on the grant and have agreed to pilot test the commercial printer when it is available next summer.

More about the University of Vermont at: www.uvm.edu