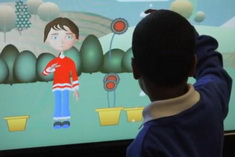 Children with autism often find computers and
technology safe, motivating and engaging,
particularly in the areas of social interaction
and communication; © ECHOES

The use of technology in the classroom is nothing new, but Topcliffe Primary School in Birmingham is breaking new ground by using technology to help pupils with autism communicate more effectively.

The school, which teaches around 30 children with various levels of autism, was one of four schools across UK, which participated in the ECHOES research project, jointly funded by the Economic and Social Research Council and the Engineering and Physical Science Research Council from universities across the UK to explore how technology can make a difference in the classroom. The researchers used the Technology Enhanced Learning programme ECHOES which allows children to engage with virtual characters and interactive technologies.

"Children interact with echoes through a large multi-touch screen," says Kaska Porayska-Pomsta, the leader of the project and a senior lecturer in Technology-Enhanced Learning at the Institute of Education, London Knowledge Lab. "Through the screen they can manipulate objects, explore the environment and they can also interact with the semi autonomous agent called Andy. Andy acts as a social partner to children and tries to actively engage children in specific activities."

Teachers at the school have found that the ECHOES program has greatly helped the children improve their social and communication skills. In fact teachers were surprised at the extent to which the children engaged with the technology.

"We never realised that the children had these skills because some of them are so locked in," says Sarah Quickendon, a Spectrum Disorders Teacher at Topcliffe School. "We watched children with autism playing with the images on the screen in ways in which none of the typically developing children had done. The normal curriculum that we were offering just wasn't allowing them to demonstrate these skills to us."

Research shows that children with autism often find computers and technology safe, motivating and engaging, particularly in the areas of social interaction and communication. Autistic children often struggle to communicate and learn effectively, but it seems that this technology can tap into their motivation and enable them to communicate in a way in which teachers simply cannot get them to do in traditional classroom settings.

However it was not just children with autism that benefited from the project, as all the children engaged with ECHOES. "The Echoes project has raised aspirations for children, for school staff and for all the community" says Ian Lowe, the Headteacher of Topcliffe School.

The researchers developed ECHOES, not just as a way of helping children with autism communicate, but also as a tool for researchers, teachers, parents, and practitioners to better understand individual children's strengths and difficulties, and the ways in which these may be addressed through technological intervention.


- More about the Economic & Social Research Council at: www.esrc.ac.uk