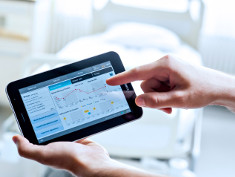 The improved on-site documentation and predictions provided by the system meant that they could give more accurate doses of insulin; © Krug

Diabetes affects around 10 percent of the population; according to the World Health Organisation (WHO). The disease places a huge financial burden on healthcare systems, and also leads to early death and poor quality of life. However, patients and healthcare professionals will now be able to partner up and manage the illness in better, more effective ways.

The REACTION project, an EU-funded health ICT research project that came to completion in February this year, has developed an exciting set of tools and technologies that are helping patients with diabetes and their doctors to better manage the condition.
REACTION project coordinator, Lydia Montandon says: "The main goal of REACTION was to investigate how information and communication technologies (ICT) can support patients and healthcare professionals in managing diabetes, by providing efficient and scalable tools that can be used in different healthcare contexts across Europe. The result is an intelligent service platform that can be used for remote monitoring and therapy management, facilitating continuous and tight control of blood glucose levels and other vital signs that are crucial for good diabetes management and insulin therapy."

The REACTION project has involved patients and healthcare providers since its inception. Patients at the Medical University of Graz in Austria and patients at primary care who are being treated at the Chorleywood Health Centre in the UK have been using the system to manage their condition. At every stage the users of the system have given feedback that has helped the researchers to design a system that is effective and intuitive.

In the hospital, nurses and doctors both said that the tools used (REACTION GlucoTab system) helped them to create better care plans for their patients. The improved on-site documentation and predictions provided by the system meant that they could give more accurate doses of insulin. The result is that patients’ glucose levels stayed far more stable in the recommended target range. In the health centre, patients used the system to keep a close eye on their symptoms and their vital signs. They could then share these readings with their doctor or nurse, and were much better able to stay healthy as a result.

During the research project, the teams developed a number of tools, including GlucoTab, a tablet-based system that advises doctors and nurses on the best course of treatment for each patient, a smartphone app that allows patients to monitor their nutrition, and networking protocols that allow patients and healthcare professionals to share readings from a range of sensors worn or temporally located on the patient’s body. Additionally, it has made significant progress in the research on automatic glycaemic control, integrating blood glucose sensors and the insulin dosing algorithm developed in the project.

But beyond the hi-tech developments, REACTION has also looked at the social, economic and legal implications of the technology. Throughout the course of the project, the researchers documented the way users and healthcare professionals felt about the technology, to better understand what might make tools like this more socially or professionally acceptable. They also studied the legal frameworks in the member states regarding privacy and liability. Moreover, the REACTION GlucoTab system was CE marked and can now be used in a clinical routine. The monitoring devices adapted for primary care patients and the gateway passed safety and EMC tests and have also obtained a CE mark. As a result, the REACTION project has brought advanced technology for diabetes management much closer to reality.

Finally, in May 2014 the GlucoTab system won the research prize for Human-Technology-Interface in the category “economic applications” awarded by the government of the federal state of Styria in Austria.