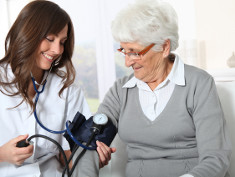 Researchers say: Engagement is the key to the use of telemedicine preventing hospitalizations; © Fabrice Michaudeau/panthermedia.net

Telemedicine used at nursing homes during hours when doctors are not typically present is a viable way to reduce avoidable hospitalizations, according to research.

Hospitalizations of nursing home residents are occurring more frequently, and result in complications, morbidity and expensive Medicare costs. When a medical issue arises on nights and weekends that cannot be addressed by the on-call physician not present at the facility, the doctor can either travel to the nursing home or recommend that the resident be sent to the hospital emergency room. Very often, the physician recommends the hospital emergency room.

Researchers David C. Grabowski of Harvard Medical School and A. James O'Malley of The Dartmouth Institute for Health Policy & Clinical Practice at the Geisel School of Medicine designed a study to determine whether nursing home residents who receive off-hour physician coverage by telemedicine experience a lower rate of hospitalizations, thereby generating savings to Medicare in excess of the costs of the telemedicine program.

The researchers found that four of the six treatment facilities were responsible for most of the telemedicine calls. Across all calls, the rate of hospitalizations declined 5.3 percent for the control group and 9.7 percent for the treatment group. This effect was largely concentrated in the four "more engaged" nursing homes, whose rate of hospitalization declined 11.3 percent.

"We did not observe a statistically significant effect of the telemedicine intervention on hospitalizations," the researchers wrote. However, when they compared the four more-engaged nursing homes with the two less-engaged ones, they found a significant decline in the hospitalization rate at the more engaged facilities. A secondary finding of the analysis is that the hospitalization rate for non-engaged intervention facilities was very close to that of the control facilities. Despite not being part of the original randomized comparison, this nonetheless strengthened the results of the engaged vs. non-engaged comparison on intuitive grounds (if homes ignore the intervention, they appear to function just like homes never exposed to the intervention).

"According to these estimates, a nursing home that typically had 180 hospitalizations per year and that was more engaged with telemedicine could expect to see a statistically significant reduction of about 15.1 hospitalizations per year" than a facility that was less engaged, the researchers said. The average Medicare savings would be roughly $150,000 per nursing home per year.

The researchers say engagement is the key to the use of telemedicine preventing hospitalizations. Simply making it available does not guarantee its use by nursing home staff. Telemedicine providers and nursing home leaders will have to take additional steps to encourage buy-in among nursing home administrators, front-line staff members, and physicians.

Under the current reimbursement system, the researchers suspect that the broad adoption of the telemedicine service will be limited ¬¬– even in the context of the positive study findings – because the facility pays for the telemedicine service while Medicare enjoys the savings realized through telemedicine. An additional financial disincentive for nursing homes to invest in telemedicine to prevent hospitalizations is present for Medicaid residents. Once a Medicaid resident is hospitalized and returns to the nursing home, the facility often receives the higher Medicare skilled nursing facility benefit.

Additional research will be needed to test models that encourage stronger engagement on the part of providers, as well as examine the implications of new policies that incentivize increased adoption, they said.

REHACARE.de; Source: The Geisel School of Medicine at Dartmouth

More about The Geisel School of Medicine at Dartmouth at: www.dms.dartmouth.edu