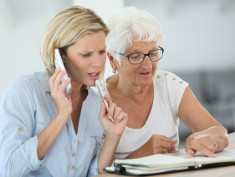 Rhode Island Hospital researchers have found that a support program administered entirely by telephone can significantly reduce depression and other symptoms in informal caregivers, such as family or friends, of individuals with dementia.

"Those caring for people with Alzheimer's disease or other forms of dementia are often under a great deal of pressure," said principal investigator Geoffrey Tremont, of the division of neuropsychology in the department of psychiatry at Rhode Island Hospital. "This pressure and stress can lead to depression in the caregiver, or to negative reactions, or even to behavior problems exhibited by the individual with dementia."

He continued, "Many of these caregivers have trouble finding time to take care of themselves, allowing their own physical and mental health issues to fester. By providing these caregivers with the option of a telephone-based support program, we are able to bring the help right to them, rather than requiring the caregivers to take time away from their loved one to attend a support group or other appointment."

A telephone-based support program is also potentially less expensive than in-person treatment options, and often more convenient for caregivers. While previous studies have shown that caregivers benefit from programs such as in-person support/group therapy sessions, this is the first such study to present data supporting a program that is delivered only by telephone.

"The number of people diagnosed with some form of dementia continues to rise," Tremont said, "and with that comes an increased need for caregivers, who often are family members. It's a lot to take on, and a great deal is expected from these caregivers. If we don't help them take care of themselves, in an easy and convenient manner, there could be negative health consequences for the caregiver, and ultimately the individual with dementia."

According to the Alzheimer's Association, there are 5 million people in the U.S. with Alzheimer's, and it is the country's sixth leading cause of death. More than 15 million family and friends provide care for those with Alzheimer's and other forms of dementia, resulting in 17.5 billion hours of unpaid care each year.

More about Lifespan at: www.lifespan.org