Test-Taking Improves Learning for the Elderly 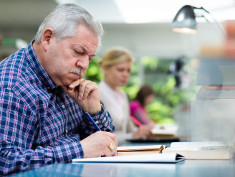 People learn more when tested on material, rather than simply rereading or restudying information; © Diego Cervo/panthermedia.net

Older adults who haven't been in school for a while are as capable of learning from tests as younger adults and college students, according to new research published by the American Psychological Association.

No matter their age or if they work or go to college full time, people appear to learn more when tested on material, rather than simply rereading or restudying information, according to research.

"The use of testing as a way to learn new information has been thoroughly examined in young students. This research builds on that and supports the notion that educators, or even employers, can use tests to increase learning in adults of all ages," said the study's lead author, Ashley Meyer, a cognitive psychologist with the Houston Veterans Affairs Health Services Research and Development Center of Excellence.

"Both groups benefited from the initial testing more than the additional studying. Taking the test and then being told how many answers they got wrong or correct was enough for these adults to improve their memory of the material as shown in a final, more difficult, test," said Meyer, who conducted the research with co-author Jessica Logan, at Rice University.

Participants who took the final test on the same day as the study period did significantly better than participants who took it two days later, according to the article. However, older adults whose memories presumably are not as good as that of young college students still showed improved memory for previously tested material compared to restudied material, even after the two-day delay.

The sample consisted of 60 college students, age 18 to 25, 60 younger adults, age 18 to 25, and 60 older adults, age 55 to 65, either attending school or living in the Houston area. The students were recruited online from Rice University and received partial course credit while the other participants were recruited online and via community flyers and received a small payment. All participants took an intelligence test before starting the experiment.

Participants had 15 minutes to study and read materials on the following four topics: tsunamis, armadillos, the human heart and black holes. After completing some math problems, which served as a distraction from what they had read, the participants completed a multiple-choice test on two of the topics. They received feedback on their performance from researchers (e.g., "You got 14 out of 20 questions correct.").

In addition to taking the multiple-choice test, the participants restudied the other two topics that had not been included in the test. After completing another set of math problems, some participants took the final test right away while others took it two days later. This final test covered all four topics and was more difficult since it required participants to write answers rather than select from multiple choices.

Since all participants had some college education, the authors suggest that future research should look at adults with less formal education to see if this testing benefit is seen across educational backgrounds and age groups.

"Working adults often need to gain new skills or knowledge as they advance through their careers," said Meyer. "Our research suggests that testing may be one way to help them improve and move up."

More about the American Psychological Association at: www.apa.org