Testing the Power of Music to Improve Senior Health 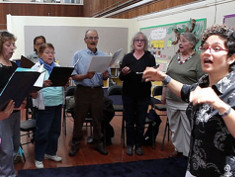 Singing in a choir helps the elderly avoid isolation at home and makes them feel like they are part of a team;
© UCSF/Elisabeth Fall

Music – as poets have noted – has the power to wash away the dust of everyday life, and medical experts believe it may also imbue physical and social benefits. Now a new University of California (UC) San Francisco research project is exploring whether singing in a community choir can provide tangible health advantages to older adults.

Over the next four years, a dozen choirs will be created at senior centers around San Francisco. The first group already has launched at the Mission Neighborhood Centers, and recruitment of choir members is underway in the Bayview and Western Addition neighborhoods.

To join Community of Voices, choir members must be 60 years of age or older – no prior choral experience is needed. Altogether, approximately 400 seniors will take part in weekly, 90-minute singing sessions over the course of a year.

The project will assess the impact on participants’ cognition, mobility and overall wellbeing during their choral year. The researchers also will examine whether singing in a community choir is a cost-effective way to promote health among culturally diverse older adults.

“We evaluate a variety of health outcomes and try to measure the mechanism of health changes – we’ll look at mood, loneliness and memory,” says principal investigator Julene Johnson, a cognitive neuroscientist and professor at the UCSF School of Nursing’s Institute for Health & Aging. Johnson studies mild cognitive impairment in older adults. She is also an amateur musician who plays flute and has sung in community choirs.

“We’ll study whether the choir singing helps participants get stronger, fall less, and whether it improves their balance,” Johnson says. “The goal is to provide scientific-based evidence that community arts programs can be used to promote health. Everyone says ‘Yes, of course they must be good for us,’ but we don’t have enough evidence yet.”

Scientific study on the therapeutic impact of music is still somewhat in its infancy, but scientists have learned that music activates certain regions in the brain and can strengthen neural connections. Research has shown that people who participate in choral singing may have better health and stronger social ties than non-singers.

Johnson’s new study in San Francisco builds upon pioneering research that she conducted in Finland as a Fulbright Mid-Career scholar in 2010. Exploring the effect of musical arts upon aging in a country with a wide abundance of choral groups, she learned that singing in a choir is an important factor in keeping older Finns healthy.

In the San Francisco study, the first choir at the Mission Neighborhood Centers – led by conductor Martha Rodriguez-Salazar, a Community Music Center faculty member – has approximately 20 members who are singing in both English and Spanish. All participants underwent baseline health assessments prior to the start of the choir, and they will complete two other health evaluations midway and at the end of their singing year.

“You can see through the smiles of the singers how they feel about being in the choir,” says Maria Bermudez, operational director of the Mission Neighborhood Centers. “The choir helps people in so many ways. It helps them avoid isolation at home, it helps with mental retention, and it makes people feel like they are part of a team. This is a great project, and a great way for people to learn a new skill.”

“Music is a universal language, it brings joy,” says Grammy-nominated music producer Maestro Curtis whose wife, Nola Curtis, will provide piano accompaniment to the singers. “It allows people to feel productive, to become a part of something. For older people, this is very valuable. Our senior citizens are a treasure, and I want to do what I can to help them enjoy the rest of their lives on this planet.”