The value of being old in different societies 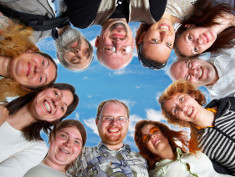 The perception of old age in a society influences subjective health of older people; © doctorkan/panthermedia.net

People aged 70 and over who identify themselves as 'old' feel worse about their own health in societies where they perceive they have lower value than younger age groups.

New research from psychologists at the University of Kent, titled 'Being old and ill across different countries: social status, age identification and older people's subjective health', used data from the European Social Survey. Respondents, who were all aged 70 and over, were asked to self-rate their health.

The results highlighted that in countries where old age is perceived as signifying low status, identifying strongly with old age is related to worse subjective health.

The study could have major implications for policy-makers across Europe, where the elevation of the perceived social status of older people would be likely to reduce negative connotations associated with old age, ensuring that identifying as 'old' would not impact negatively on how healthy people felt.

More about the University of Kent at: www.kent.ac.uk