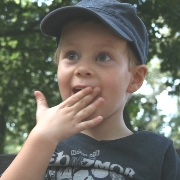 A new treatment can help nonverbal children with autism to develop speech, according to a proof-of-concept study led by researchers at Beth Israel Deaconess Medical Center (BIDMC).

Known as Auditory-Motor Mapping Training (AMMT), the novel treatment builds on the observations that children with autism – who typically struggle with communication, as well as social interactions – often respond positively to music.

"Communication deficits are one of the core symptoms of autism," explains first author Catherine Wan, a researcher in the Music and Neuroimaging Laboratory of BIDMC's Department of Neurology. "It has been estimated that up to 25 percent of all children with autism are nonverbal, but surprisingly, not much is out there treatment-wise that directly helps these children to speak."

Autism affects an estimated one in 110 children and one in 70 boys.
The AMMT treatment uses a combination of singing (intonation) and motor activities to strengthen a network of brain regions that is thought to be abnormal in children with autism.

"We developed AMMT, in part, because another intonation-based therapy, known as Melodic Intonation Therapy, had been successful in helping stroke patients with aphasia recover their ability to speak," adds senior author Gottfried Schlaug.

After eight weeks of AMMT treatment (five days per week), the six children in the proof-of-concept study - who ranged in age from six to nine and were previously completely nonverbal - were able to approximate whole words and phrases. The children could also generalize their speech production to words that were not practiced during the therapy.

"In the future, we plan to compare the effectiveness of AMMT with a control intervention," she adds. "For these nonverbal children to say their first words is especially gratifying for parents, and represents a critical step forward in their language development."


- More about the Beth Israel Deaconess Medical Center at: www.bidmc.harvard.edu