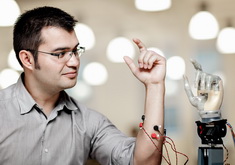 Catalan demonstrates how the system works
with the aid of electrodes, which capture
bio-electric signals from the surface of the
arm; © Oscar Mattsson

The world’s first implantable robotic arm controlled by thoughts is being developed by Chalmers researcher Max Ortiz Catalan. The first operations on patients will take place this winter.

“Our technology helps amputees to control an artificial limb, in much the same way as their own biological hand or arm, via the person's own nerves and remaining muscles. This is a huge benefit for both the individual and to society”, says Max Ortiz Catalan, industrial doctoral student at Chalmers University of Technology in Sweden.

Ever since the 1960s, amputees have been able to use prostheses controlled by electrical impulses in the muscles. Unfortunately, however, the technology for controlling these prostheses has not evolved to any great extent since then. For example, very advanced electric hand prostheses are available, but their functionality is limited because they are difficult to control.

“All movements must by pre-programmed", says Catalan. “It’s like having a Ferrari without a steering wheel. Therefore, we have developed a new bidirectional interface with the human body, together with a natural and intuitive control system.”

Today’s standard socket prostheses, which are attached to the body using a socket tightly fitted on the amputated stump, are so uncomfortable and limiting that only 50 percent of arm amputees are willing to use one at all.

This research project is using the world-famous Brånemark titanium implant instead (OPRA Implant System), which anchors the prosthesis directly to the skeleton through what is known as osseointegration.

Currently, in order to pick up the electrical signals to control the prosthesis, electrodes are placed over the skin. The problem is that the signals change when the skin moves, since the electrodes are moved to a different position. Additionally, the signals are also affected when we sweat, since the resistance on the interface changes.

In this project, the researchers are planning to implant the electrodes directly on the nerves and remaining muscles instead. Since the electrodes are closer to the source and the body acts as protection, the bio-electric signals become much more stable. Osseointegration is used to enable the signals inside the body to reach the prosthesis. The electrical impulses from the nerves in the arm stump are captured by a neural interface, which sends them to the prostheses through the titanium implant. These are then decoded by sophisticated algorithms that allow the patient to control the prosthesis using his or her own thoughts.

In existing prostheses, amputees use only visual or auditory feedback. This means, for example, that you have to look at or hear the motors in the prosthesis in order to estimate the grip force applied to a cup if you want to move it around. With the new method, patients receive feedback as the electrodes stimulate the neural pathways to the patient’s brain, in the same way as the physiological system. This means that the patient can control his or her prosthesis in a more natural and intuitive way. This has not been possible previously.


- More about the Chalmers University of Technology at: www.chalmers.se