Thousands of older adults and persons with disabilities transitioning home 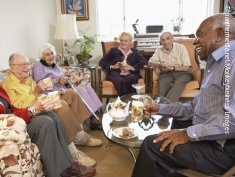 Elderly people living in their own apartments and meeting people of their choice are usually happier with their daily lives; © panthermedia.net/ Monkeybusiness Images

The State of Connecticut's Department of Social Services, with its state evaluator UConn's Center on Aging, successfully transitioned more than 2,200 older and disabled Connecticut residents from nursing homes and other institutions to their own home or a community setting between 2008 and 2014, as part of the federal "Money Follows the Person Rebalancing Demonstration."

The goal of this national effort is to reduce Medicaid's growing expenditures by rebalancing long-term care services from expensive institutional healthcare settings such as nursing homes to lower-cost community settings. The Connecticut program's results, published in the October issue of the journal Health Affairs, also show a significant boost in residents' overall quality of life and life satisfaction after transitioning home to the community.

The Money Follows the Person program works by identifying people in high-cost institutional settings such as nursing homes, rehabilitation hospitals, and group homes of five or more, who wish to voluntarily transition back to a community setting such as their own private home or apartment, an assisted living facility, a group home with four or fewer people, or living with a family member. Each participant receives a personalized Medicaid benefit and healthcare services community care plan that meets their needs while also costing less than an institutional setting.

Over its first six years, Connecticut's program successfully transitioned 2,262 institutional residents. Almost three-quarters of the participants moved into their own apartments (71 percent), while others moved into their or a family member's home (21 percent), or an assisted living facility, residential care home, or group home (8 percent).

Up to two years after the community transitions, survey results showed 81 percent of residents were still living in the community and significantly happier with their daily lives. At 24 months post-transition, 93 percent were satisfied with their services, 93 percent liked where they lived, 96 percent felt treated well by providers with respect and dignity, and global life satisfaction was high, at 83 percent.

"UConn's Center on Aging is very pleased to be evaluating this program that positively impacts the daily lives of Connecticut's older adults and persons with disabilities, while consistently improving their quality of life and happiness," says the Connecticut program's principal investigator Julie Robison, PhD, associate professor of medicine in the Center on Aging located at UConn Health in Farmington and the lead author of the Health Affairs article. "Connecticut's program is making amazing progress and is a true win-win for institutional residents rejoining their communities and their families with enhanced quality of life and happiness, and also for the policy-makers who are improving Connecticut's financial health by rebalancing Medicaid healthcare spending."

Connecticut was one of the earliest among 46 states and the District of Columbia participating in the Money Follows the Person program, sponsored by the Centers for Medicare and Medicaid Services (CMS). The initiative is funded by the Deficit Reduction Act of 2005 and was expanded under the Affordable Care Act.

Expansion of Connecticut's Money Follows the Person program, launched in 2008, was one of the first initiatives announced by the administration of Gov. Dannel P. Malloy and Lieut.-Gov. Nancy Wyman upon taking office in 2011. The program is also an integral part of the Governor's Strategic Rebalancing Initiative for Long-Term Services and Supports.

"Connecticut is becoming a true leader in long-term care services enhancements for those who need them," says Dawn Lambert, Project Director of Medicaid Rebalancing Initiatives in Connecticut's Department of Social Services and a co-author of the Health Affairs article. "We thank Governor Malloy and the State Legislature for helping us make such huge strides in empowering thousands of Connecticut's older adults and citizens with disabilities to live more independently in their communities with the Medicaid support they need following them home. This program is also helping to improve the infrastructure of our State's community services."

In 2015, Connecticut's Money Follows the Person program recently reached the milestone of 3,000 successful transitions. It is set to continue, with increased federal funding, to transition and track residents returning to their communities through 2018; and will continue after that as a state-funded program.

"The program's outcomes tell a consistent story of improved quality of life," says co-author Noreen Shugrue, research associate at UConn's Center on Aging. "Thousands of people have returned to community living and the vast majority have thrived with the bonus of higher quality of life and satisfaction."

Connecticut statistics show the rate of institutional care versus home care in a community setting in 2008 was 48 percent to 52 percent. However, thanks in part to the Money Follows the Person program by 2014, these rates were rebalanced to 41 percent of persons in an institution to 59 percent in a community setting. In addition, the rebalancing program has helped the percentage of institutional long-term Medicaid expenditures in the state of Connecticut to drop from 67 percent in 2008 to 55 percent in 2014.

To qualify for the program, participants must have lived in institutions for at least 90 days, have Medicaid, and want to move to a community-based setting. However, the costs of the community care plan cannot exceed the individual's current institutional setting costs.

The Health Affairs article also notes potential areas for improvement in the program, since after one year 14 percent had returned to an institution; and post-transition, one fourth of participants reported a recent fall, and about half experienced symptoms of depression.

The Connecticut report suggests that state and national program leaders can make improvements to their programs by providing person-centered planning, securing any unmet needs for medical and mental care, encouraging community involvement, implementing fall prevention measures, and identifying other specific community services or programs that might protect people from reinstitutionalization and further improve their quality of life.

More about the University of Connecticut at: www.uconn.edu