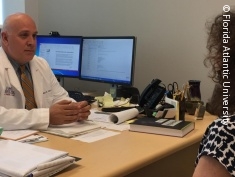 James E. Galvin, one of the most prominent neuroscientists in the country, developed the Lewy Body Composite Risk Score (LBCRS); © Florida Atlantic University

Although Lewy Body disease (LBD) is the second-most-common degenerative disease after Alzheimer's disease, it's not exactly a household name. It affects more than 1.3 million Americans, is poorly recognized, and diagnosis is often significantly delayed. Patients with LBD simultaneously experience losses in cognitive function, mobility and behavior.

The late Robin Williams had this form of dementia as did legendary NHL coach Alger Joseph "Radar" Arbour, which also can cause visual hallucinations and make depression worse. Until now, there has been no way to assess or operationalize many of the cognitive and behavioral symptoms of LBD in clinical practice.

A leading neuroscientist at Florida Atlantic University has developed the "Lewy Body Composite Risk Score" (LBCRS) to quickly and effectively diagnose LBD and Parkinson's disease dementia (PDD) in about three minutes. The LBCRS is a brief rating scale that can be completed by a clinician to assess clinical signs and symptoms highly associated with the pathology of this disease.

With this important tool, a clinician can assess whether the patient has bradykinesia, rigidity, postural instability, or rest tremor without having to grade each extremity. This simple, one-page survey provides structured yes/no questions for six non-motor features that are present in patients with LBD, but are much less commonly found in other forms of dementia.

The LBCRS study, "Improving the Clinical Detection of Lewy Body Dementia with the Lewy Body Composite Risk Score," recently published in Alzheimer's & Dementia, the journal of the Alzheimer's Association, involved 256 patients who were compared with the clinical dementia rating and gold standard measures of cognition, motor symptoms, function and behavior. The test was administered in a "real-world" clinic setting with patients who were referred from the community rather than in a research sample. The clinic sample had a mixture of gender, education, comorbidities, behavioral, affective, motor symptoms, and diagnoses. The LBCRS was able to discriminate between Alzheimer's disease and LBD with 96.8 percent accuracy, and provided sensitivity of 90 percent and specificity of 87 percent.

For the study, caregivers completed evaluations to determine the presence and severity of non-cognitive symptoms observed in the patient and their impact on the caregiver. Each patient was administered a 30-minute test battery at the time of the office visit to assess their cognitive status. The LBCRS was completed after all other rating scales were scored and the diagnosis was presented to the patient and family.

"Most patients never receive an evaluation by a neurologist skilled in the diagnosis of Lewy body dementia, and significant delays and misdiagnoses occur in most patients with this disease," said James E. Galvin, M.D., M.P.H., one of the most prominent neuroscientists in the country who developed the LBCRS, and a professor of clinical biomedical science in FAU's Charles E. Schmidt College of Medicine and a professor in FAU's Christine E. Lynn College of Nursing. "This new tool has the potential to provide a clearer, more accurate picture for those patients who are unable to be seen by specialists, hastening the correct diagnosis and reducing the strain and burden placed on patients and caregivers."

Another important aspect of the LBCRS is its ability to improve the sensitivity of diagnosis, thereby reducing the risk of exposure to patients with LBD to medications that can have potentially serious adverse consequences. The survey also increases the potential opportunity to receive appropriate symptomatic therapies in a timely fashion, and lessens the inappropriate exclusion from and inclusion into clinical trials.

"Early detection of Lewy body dementias will be important to enable future interventions at the earliest stages when they are likely to be most effective," said Galvin. "Our study provides evidence-based methodology that will have applications in clinical practice, participation in clinical trials, prevention studies, community surveys, and biomarkers research."

Galvin is one of the leading international experts on LBD, and has been working to improve clinical detections by combining biomarkers including high density EEG, functional and structural MRI, PET scans and CSF biomarkers to characterize and differentiate LBD from healthy aging and other neurodegenerative diseases.

More about the Florida Atlantic University at: www.fau.edu