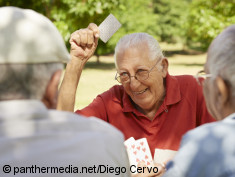 Today’s 75-year-olds are more satisfied and happier with their lives; © panthermedia.net/Diego Cervo

A study financially supported by the German Federal Ministry of Education and Research reveals positive trends in human aging. Older adults today show higher levels of cognitive functioning and well-being than older adults of the same age 20 years ago. This has been found in a collaborative study among several research institutions in Berlin, including the Humboldt-Universität zu Berlin, Charité Universitätsmedizin Berlin, the Max Planck Institute for Human Development (MPIB), and the German Socio-Economic Panel (SOEP). The result will be published in the scientific journal "Psychology and Aging" and is available as a SOEP advance online paper.

Old age is getting younger. On average, today’s 75-year-olds are cognitively much fitter than the 75-year-olds of 20 years ago. At the same time, the current generation of 75-year-olds also reports higher levels of well-being and greater life satisfaction. "The gains in cognitive functioning and well-being that we have measured here in Berlin are considerable and of great significance for life quality in old age," comments Ulman Lindenberger, Director of the Center for Lifespan Psychology at the Max Planck Institute for Human Development. The researchers relate the gains to sociocultural factors such as education. In their opinion, the increase in well-being is also due to better physical fitness and higher levels of independence in old age.

"However, we expect that these positive historical trends areattenuated at the end of life," adds Denis Gerstorf, Professor for Developmental Psychology at the Department of Psychology, Humboldt-Universität zu Berlin. During the final stage of life, the increase in good years of life is likely to give way to a rapid and marked drop in both cognition and well-being. Current studies by Gerstorf and colleagues examining old people’s last years of life support this view.

The large-scale study in Berlin involves researchers from the Humboldt- Universität zu Berlin, the Max Planck Institute for Human Development, the multi-cohort study "Socio-Economic Panel" (SOEP) at the German Institute for Economic Research (DIW Berlin), and Charité Universitätsmedizin Berlin. The publication is based on data from the Berlin Aging Studies (BASE and BASE-II) that were compared with SOEP data, which are representative for Germany. "The combination of data for a large city, in this case Berlin, with data representative for the whole of Germany (SOEP) is an important feature of BASE und BASE-II," emphasizes Gert G. Wagner, Executive Board Member of the DIW Berlin and Max Planck Fellow at the MPIB.

The researchers used the data of 708 Berliners aged 60 and over who were tested for cognitive functioning and rated their well-being in the context of the Berlin Aging Study II. They compared these data with those from the Berlin Aging Study, the predecessor study of the early 1990s, and identified 161 "statistical twins" mostly consisting of one person of the same sex from each of the two studies, who were as similar to each other in age and education as possible. Factors such as medically diagnosed illnesses were considered as well. The average age of these comparison couples was 75 years (the youngest person was 65 years and the oldest was 89 years of age). To check for comparability, the researchers also took into account information from the SOEP study of the DIW Berlin that has collected representative population data in Germany for 30 years.