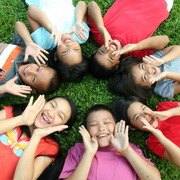 Engaging peers in social skills
intervention may be more helpful
for children with ASD;
© panthermedia.net/P. Chungyam

According to a study funded by the National Institutes of Health, a shift away from more commonly used interventions that focus on training children with autism spectrum disorder (ASD) directly may provide greater social benefits for children with ASD.

"Real life does not happen in a lab, but few research studies reflect that," said Thomas R. Insel of the National Institute of Mental Health (NIMH). "As this study shows, taking into account a person's typical environment may improve treatment outcomes."

The most common type of social skills intervention for children with ASD is direct training of a group of children with social challenges, who may have different disorders and may be from different classes or schools. The intervention is usually delivered at a clinic, but may also be school-based and offered in a one-on-one format. Other types of intervention focus on training peers how to interact with classmates who have difficulty with social skills. Both types of intervention have shown positive results in studies, but neither has been shown to be as effective in community settings.

Researchers compared different interventions among 60 children, ages 6-11, with ASD. All of the children were mainstreamed in regular education classrooms for at least 80 per cent of the school day.

All interventions were given for 20 minutes two times a week for six weeks. A follow-up was conducted 12 weeks after the end of the study. After the follow up phase, all children with ASD who had received neither intervention were re-randomised to one of the other treatment categories.


- More about National Institute of Mental Health (NIH) at: www.nimh.nih.gov