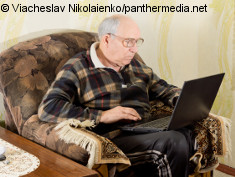 When elderly people get access to social media and also training in how to use it, it improves their well-being; © Viacheslav Nikolaienko/ panthermedia.net

Training older people in the use of social media improves cognitive capacity, increases a sense of self-competence and could have a beneficial overall impact on mental health and well-being, according to a landmark study carried out in the UK.

A two-year project funded by the European Union and led by the University of Exeter in partnership with Somerset Care Ltd and Torbay & Southern Devon Health and Care NHS Trust gave a group of vulnerable older adults a specially-designed computer, broadband connection and training in how to use them.

Those who received training became more positive about computers over time, with the participants particularly enjoying connecting with friends and relatives via Skype and email.

The ageing population is one of the major challenges facing our society. It is expected that between 2010 and 2060, the number of people aged 65 and over across Europe will grow from 17.4 percent to 29.5 percent of the total population. The project, called Ages 2.0, aimed to assess the extent to which the internet and social media offer a tool for promoting active ageing and addressing the social isolation that is too often a feature of older age.

It found that those trained had heightened feelings of self-competence, engaged more in social activity, had a stronger sense of personal identity and showed improved cognitive capacity. These factors indirectly led to overall better mental health and well-being.

Thomas Morton of the University of Exeter, who led the project in the UK said: "Human beings are social animals, and it's no surprise that we tend to do better when we have the capacity to connect with others. But what can be surprising is just how important social connections are to cognitive and physical health. People who are socially isolated or who experience loneliness are more vulnerable to disease and decline. For these reasons finding ways to support people's social connections is a really important goal. This study shows how technology can be a useful tool for enabling social connections, and that supporting older people in our community to use technology effectively can have important benefits for their health and well-being."

Participants in the study were all vulnerable older adults between the ages of 60 and 95 years of age who were receiving support from Somerset Care Ltd. The 76 volunteers were drawn both from those receiving care in the community and those living in any of the not-for-profit organisation's 31 residential care homes.

Half of the participants were randomly assigned to receive training and the other half to a control group who received care as usual. The training involved the installation of an 'Easy PC package' consisting of a touch screen computer and keyboard, and a broadband internet connection. They were able to keep the computer for 12 months, including a three-month training period.

One of the study's participants, Margaret Keohone, said: "Having this training changes people's lives and opens up their worlds, invigorates their minds and for lots of us gives us a completely different way of recognising our worth as we age. I was just slipping away into a slower way of life."

"As the training programme developed with my participants their confidence grew and they were keen to tell me how family members had emailed back, Skyped or 'liked' a comment or a picture on Facebook. Seeing the smiles on my participant's faces when they Skyped a family member in the UK or abroad was such a special moment," said Emma Green, the Care Technologist from Somerset Care who delivered training to Margaret and others in the study. "One of the best Skype calls was during a visit to my caravan in Cornwall when I Skyped a client who used to enjoy camping. We were around the camp fire and he was able to be a part of our group from the laptop, looking at the fire and joining in. They all know that I am only an email or Skype call away and it has been fabulous being a part of the Ages 2.0 project."

Those behind the Ages 2.0 study hope its findings will help inform future policy on digital inclusion and the delivery of tele-health and tele-care strategies.

More about the University of Exeter at: www.exeter.ac.uk