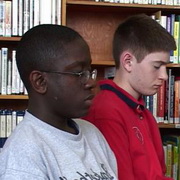 The first exploratory study, followed a group of middle school students diagnosed with ADHD who meditated twice a day in school. After 3 months, researchers found over 50 per cent reductions in stress, anxiety, and ADHD symptoms. During the study, a video was made of some students discussing what it felt like to have ADHD, and how those experiences changed after 3 months of regular TM practice.

The study was conducted over a period of six months in an independent school for children with language-based learning disabilities in Washington, DC. The study showed improved brain functioning, increased brain processing, and improved language-based skills among ADHD students practicing the Transcendental Meditation technique.

Students were pretested, randomly assigned to TM or delayed-start comparison groups, and post-tested at 3- and 6-months. Delayed-start students learned TM after the 3-month post-test.

In addition, students were administered a verbal fluency test. This test measured higher-order executive functions, including initiation, simultaneous processing, and systematic retrieval of knowledge. Performance on this task depends on several fundamental cognitive components, including vocabulary knowledge, spelling, and attention.

"Because stress significantly compromises attention and all of the key executive functions such as inhibition, working memory, organisation, and mental flexibility, it made sense that a technique that can reduce a child's level of stress should also improve his or her cognitive functioning," said Stixrud.

The Transcendental Meditation technique is an effortless, easy-to-learn practice, unique among categories of meditation. "TM does not require concentration, controlling the mind or disciplined focus – challenges for anyone with ADHD," Grosswald added.


- More about the Maharishi University of Management at www.mum.edu