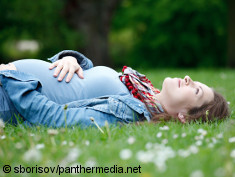 Even if a mother does not have gestational diabetes, if her blood glucose concentrations are constantly elevated this can be harmful to her baby; © sborisov/ panthermedia.net

The risk of developing type 2 diabetes, obesity, and cardiovascular disease is affected by exposures in the uterus. Researchers at Lund University in Sweden are now calling for updated guidelines in light of research evidence from the past decades.

The vicious cycle of diabetes describes a scenario where people are becoming fatter, often with elevated levels of glucose, and at increased risk for women to develop gestational diabetes (GDM). Intrauterine exposure to GDM, itself, is a major risk factor for later obesity and diabetes, thus perpetuating this maternal-offspring cycle of disease.

Researchers from Lund University have published an overview of evidence across the past few decades. They emphasize the need to update diabetes prevention guidelines that consider fetal programming events in pregnancy as part of the risk equation.

The fetal programming hypothesis hinges around the idea that the intrauterine environment, the milieu in which the fetus is exposed as it grows, impacts the trajectory for disease risk later in life.

The idea has been around for several hundred years. Da Vinci talked about this in the 1400’s where the mother conveyed to her unborn child the nutritional qualities of the food that she ate. But it was really in the 1980’s that the idea was picked up in a publication in a British Medical Journal, where Hales et al talked about the effects of birth weight on later diabetes risk.

"More recently research on fetal programming has been advanced by technological developments that has allowed the detailed molecular characterization of tissue samples from babies and mothers," says Paul Franks, professor of Genetic Epidemiology at Lund University and author of the review. "That is really where I would say the field is going, in terms of developing the ideas around epigenetic programming in utero, and later risks of diabetes and cardiovascular disease."

Current guidelines to prevent type 2 diabetes tend to focus on lifestyle modification and in some cases pharmacological intervention.
"This review describes the evidence showing that there are other factors that may be intervened upon much earlier in life, and serves as a precursor to upcoming work from Lund University and at the University of Copenhagen," says co-author Angela Estampador. "We will try to identify novel biomarkers that detect primordial defects arising in pregnancy or early childhood. The results of this work should help inform guidelines to substantially improve prevention of diabetes."

The relationship between an intrauterine nutrition and birth weight (a marker of fetal nutrition) and diabetes risk is U-shaped, such that offspring born to under- or over-nourished pregnancies, for example, are at a greater risk of diabetes than those born to moderately nourished pregnancies.

So, how much can you blame your mother for developing diseases? And what is the role of the father?

"The message should never be to blame the mother, but rather to empower her through the awareness and expansion of choice regarding possibilities in improving their child's health. There is a lack of evidence supporting epigenetic effects in human clinical trials, although there are currently several randomized controlled trials that are ongoing in the US, Europe and Australia, for example, that we discuss in this review," says Angela Estampador.

The role of the father is less clear. The researchers highlight some key studies in animal models that suggest transgenerational effects of paternal exposures on offspring health. "This is an important area that requires further investigation, especially in human studies," Angela Estampador concludes.