Understanding Alzheimer's disease with the help of trisomy 21 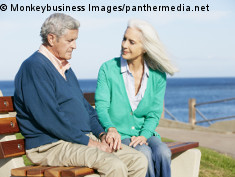 The link between a protein typically associated with Alzheimer's disease and its impact on memory and cognition may not be as clear as once thought, according to a new study from the University of Wisconsin-Madison's (UW) Waisman Center. The findings are revealing more information about the earliest stages of the neurodegenerative disease.

The researchers – including lead study author Sigan Hartley, UW-Madison assistant professor of human development and family studies, and Brad Christian, UW-Madison associate professor of medical physics and psychiatry and director of PET Physics in the Waisman Laboratory for Brain Imaging and Behavior – looked at the role of the brain protein amyloid-β in adults living with trisomy 21, a genetic condition that leaves people more susceptible to developing Alzheimer's.

However, the findings of their study not only may help scientists better understand the condition as it impacts those living with trisomy 21 (also known as Down syndrome), but they are also relevant to adults without the genetic syndrome.

"There are many unanswered questions about at what point amyloid-β, together with other brain changes, begins to take a toll on memory and cognition and why certain individuals may be more resistant than others," says Hartley.

The UW-Madison scientists, along with collaborators at the University of Pittsburgh, studied 63 healthy adults with trisomy 21, aged 30 to 53, who did not exhibit clinical signs of Alzheimer's or other forms of dementia. They found that many adults with trisomy 21 had high levels of amyloid-β protein but did not suffer the expected negative consequences of the elevated protein.

Alzheimer's disease is the sixth leading cause of death in the U.S. People with trisomy 21 are born with an extra copy of the 21st chromosome, where the gene that codes for the amyloid-β protein resides.

For the study, which was conducted over the course of two days, researchers used magnetic resonance imaging (MRI) and positron emission tomography (PET) scans to capture images of the participants' brains. Twenty-two of the 63 participants had elevated levels of amyloid-β but showed no evidence of diminished memory or cognitive function when compared to those without elevated levels of the protein. The researchers controlled for differences in age and intellectual level.

Similarly, when assessed as a continuous measure, amyloid-β levels were not tied to differences in memory or cognitive ability, such as changes in visual and verbal memory, attention and language.

More about the University of Wisconsin-Madison at: www.wisc.edu