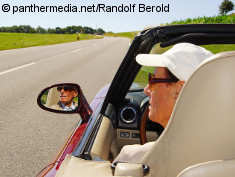 When one elderly person stopped driving, both spouses were less likely to work or volunteer; © panthermedia.net/Randolf Berold

The ability to drive can be central to a person's identity and can be an important expression of independence. When the elderly become unable to drive, due to age or deteriorating health, their emotional well-being can decline as a result of being unable to maintain social relationships or work schedules that require travel by car. Now, a University of Missouri researcher has found that even if just one member of a couple stops driving, negative consequences result for both the driver and non-driver.

The researcher recommends that the elderly, and their adult children, carefully discuss and plan for the transition to driving cessation.

"Individuals should recognize that making the decision to stop driving is a major life change that needs to be taken seriously," said Angela Curl, assistant professor in the School of Social Work within the MU College of Human Environmental Sciences. "The safety of the driver should be discussed as just one factor among many. Any time you recommend that an individual stop driving, you should talk about alternative transportation options or, possibly, relocation. If the family wants to help, it's best to come up with a concrete transportation plan ahead of time. These are complicated, difficult decisions, and mediation of the discussion can often be helpful through, for example, a social worker or counselor."

Curl found that when one spouse stopped driving, both spouses were less likely to work or volunteer. Also, the likelihood that a husband would work or a wife would volunteer decreased further over time.

"People who are in the process of making the decision to stop driving often think that their spouses will compensate for their inability to drive," said Curl. "However, in our research, we found that having a spouse who can drive does not completely remove the negative consequences of driving cessation."