Users to fine-tune hearing aids themselves 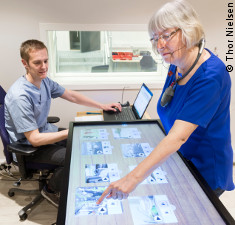 Using sound images and a touch screen, the user can generate the sounds of an everyday situation, such as a workplace canteen; © Thor Nielsen

More than 20 per cent of people with hearing aids use their devices for less than one hour a day because of problems they encounter with tuning the settings. But now users can participate in fine-tuning their devices themselves.

As many as 700,000 people in Norway have some kind of hearing impairment, and many want hearing aids to help them function better both at work and at home. But the fine-tuning and use of these devices constitute a major challenge.

"Sadly, many devices end up neglected in drawers", says Geir K. Hanssen at SINTEF. "It's also becoming too difficult for some users to explain their hearing problems to others in words alone. Moreover, the clinics lack audiometry facilities properly equipped to assist their patients, who are left with no influence on the fine-tuning of their hearing aids", he says.

Two years ago IT researchers at SINTEF used their expertise to help put together applications to the Research Council of Norway. They succeeded in releasing NOK 6.2 million in project funds from the Council's VERDIKT programme. The funds are being channelled into a development project called ABRUMED in which hearing aid users will be able to take an active part in fine-tuning the settings on their own devices.

At the acoustics laboratory somewhere in a basement at SINTEF, a table has been set up with a touch screen monitor that can display sound images. The user and the audiometrist work together with the help of a sound simulator to construct the images. The sound images will represent situations which a user will typically encounter during the day, to which realistic soundtracks are added – for example, a workplace canteen involving a lot of sound and echoes, or driving a car with associated traffic noise.

"All the sounds are real and the system plays them back in such a way that they can be transmitted from any desired direction", says Hanssen. "The user then explains to the audiometrist exactly what problem he or she is experiencing, and has access to buttons which allow him or her to remotely control the sound and fine-tune the settings. For example, the user may touch on an image of a canteen.

He or she will then be exposed to sounds that we typically associate with canteens, and will have the opportunity to add to, or increase the complexity of, the sound by touching on other images, such as a piece of cutlery. Each setting determined by the user is transferred immediately to the hearing aid so that the he or she can hear the effect it produces”, he says.

The company AudioPlus Concept AS owns the system in its present form, and intends to commercialise it. It is aiming to set up the new system at one or two of its clinics before the summer.

A mobile app has also been developed which allows the user to record problematic sounds both at home or at work. These are then transferred automatically via the internet so that they can be played back in the sound simulator the next time the user attends a clinic.#