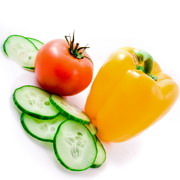 The Loma Linda University study found that while 25 percent of vegetarians had metabolic syndrome, the number significantly rises to 37 percent for semi-vegetarians and 39 percent for non-vegetarians. The results hold up when adjusted for factors such as age, gender, race, physical activity, calories consumed, smoking, and alcohol intake.

"In view of the high rate of metabolic syndrome in the United States and its deleterious health effects, we wanted to examine lifestyle patterns that could be effective in the prevention and possible treatment of this disorder," says lead researcher Nico S. Rizzo.

"I was not sure if there would be a significant difference between vegetarians and non-vegetarians, and I was surprised by just how much the numbers contrast," he continues. "It indicates that lifestyle factors such as diet can be important in the prevention of metabolic syndrome."

The study examined more than 700 adults randomly sampled from Loma Linda University's Adventist Health Study 2, a long-term study of the lifestyle and health of almost 100,000 Seventh-day Adventist Christians across the United States and Canada.

"This work again shows that diet improves many of the main cardiovascular risk factors that are part of metabolic syndrome," says Gary Fraser, principal investigator of Adventist Health Study 2. "Trending toward a plant-based diet is a sensible choice."