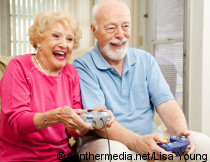 Older adults enjoyed playing video games. They can be a challenging and appealing activity that allows people to experience the feeling of accomplishing new skills later in life; © panthermedia.net/Lisa Young

Introducing video games as a means of bringing older adults in long-term care together may not always be an easy task, according to new research.

Previous studies have shown the positive effects of motion-based video games, such as those available on the Nintendo Wii or Microsoft Kinect systems, on the cognitive, physical and emotional well-being of older adults in long-term residential care. However, offering stimulating and accessible leisure activities such as this can be difficult for care providers as the impact of age-related changes and impairments on residents grows.

A new study has for the first time examined the practical challenges and opportunities that arise when games are integrated into activities for different groups of older people living in long-term care facilities.

The study involved weekly gaming sessions over a three month period at two long-term care facilities: A senior residence offering independent and assisted living apartments for older adults, and a care facility that specializes in individuals with special needs, including older adults who experience age-related changes and impairments such as dementia or mobility disabilities. Games used in the study included custom-designed motion-based casual games along with Xbox 360 games mimicking the real-world, for example, bowling.

Gerling said: "We were interested in the potential of games to engage older adults in long-term care in group activities. We looked at how people approached video games, to see if they stuck with it and found it enjoyable, and also to find out if this stimulated group activities and resulted in friendships. Players at the senior residence quickly understood how the games worked and it became an actual group activity. People formed relationships, took more ownership and adapted games to fit in with how they wanted to play. We found it more difficult to bring people together at the care home, mostly because of different age-related impairments. In some cases, players needed a lot of support from staff, and depended on them being able to attend gaming sessions."

The findings suggest that older adults enjoyed playing video games, and that games can be a challenging and appealing activity that allow people to experience the feeling of accomplishing new skills later in life.

However, the extent to which people experience the benefit of gaming is determined largely by whether they have developed any disabilities linked to ageing. These changes may impact a person’s ability to engage with games for reasons beyond simple game accessibility, such as how much assistance they need to play, and whether they feel comfortable playing games in a group setting.
Gerling said: "You always have a split of people who like playing video games and those who don’t, no matter what age. But older people learning to play new games in public may feel particularly uncomfortable if they are experiencing vulnerability over their age-related changes and impairments. Some older adults require extensive support, both to gain access to gaming sessions and throughout play."

"We need to make sure that video games created for older adults in long-term care are adaptive - there’s a fine line between challenging people and giving them something meaningful to accomplish, as opposed to doing harm. To be successful games need to engage players of all abilities and be tailored towards specific groups. It’s really important to be mindful of the context in which games will be played and be understanding of the individual abilities of the player. This is particularly important when evaluating the value of games for improving the quality of life, and when creating games with a purpose beyond entertainment, such as therapy and rehabilitation."

Gerling’s future research will explore further how communities of older adults playing video games on a regular basis over prolonged periods of time evolve; and also focus on the benefits that video game play can have on well-being in late life.

More about University of Lincoln at:www.lincoln.ac.uk