Violent video games not linked to aggression in adults with autism 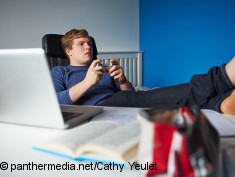 Study found: Violent video games do not cause people with autism to act violently; © panthermedia.net/Cathy Yeulet

Following the 2012 shooting in Newtown, Connecticut, some in the media and the public speculated a link existed between autism spectrum disorder and violence and, in particular, that violent video games may cause gamers with autism to act violently. Now, a study from the University of Missouri has found evidence to contradict this speculation.

"There are some caveats to our findings," Engelhardt said. "For example, we only exposed participants to violent or nonviolent games for 15 minutes before measuring their willingness to behave aggressively. This study, therefore, cannot speak to the potential long-term effects of violent-video-game exposure."

After playing one of two video games that differed only in the amount of violence present in the game, participants engaged in a task to measure aggression. In that task, participants were led to believe they were competing against another person in a trial to test their reaction times. If the participant won the trial, he or she could "blast" their opponent with a loud noise. The length and volume of that noise were determined by the participant, which allowed the researchers to measure aggression levels in the participants. More than 100 adults between the ages of 17 and 25, half with autism spectrum disorder and half typically developing, participated in the study.