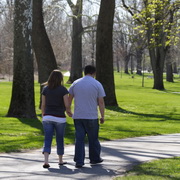 Walking five miles per week
protects the brain structure and
slows the progression of
Alzheimer's; © SXC

Walking may slow cognitive decline in adults with mild cognitive impairment (MCI) and Alzheimer's disease, as well as in healthy adults, according to a study.

"We found that walking five miles per week protects the brain structure over 10 years in people with Alzheimer's and MCI, especially in areas of the brain's key memory and learning centers," said Cyrus Raji from the Department of Radiology at the University of Pittsburgh in Pennsylvania. "We also found that these people had a slower decline in memory loss over five years."

Patients were recruited from the Cardiovascular Health Study. The researchers monitored how far each of the patients walked in a week. After 10 years, all patients underwent 3-D MRI exams to identify changes in brain volume.

"Volume is a vital sign for the brain," Raji said. "When it decreases, that means brain cells are dying. But when it remains higher, brain health is being maintained."

In addition, patients were given the mini-mental state exam (MMSE) to track cognitive decline over five years. Physical activity levels were correlated with MRI and MMSE results. The analysis adjusted for age, gender, body fat composition, head size, education and other factors.

"Alzheimer's is a devastating illness, and unfortunately, walking is not a cure," Dr. Raji said. "But walking can improve your brain's resistance to the disease and reduce memory loss over time."


- More about the Radiological Society of North America at www.rsna.org