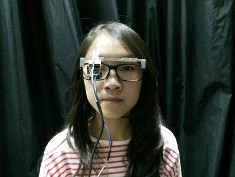 A group of researchers in Taiwan has developed a new optical technology that may be able to detect an early complication of diabetes sooner, when it is more easily treated. If the device proves safe and effective in clinical trials, it may pave the way for the early detection and more effective treatment of this complication, called diabetic autonomic neuropathy, which is common among people with both Type 1 and Type 2 diabetes.

The condition progressively affects the autonomic nerves controlling vital organs like the heart and gastrointestinal system. This can lead to problems like fainting, incontinence, nausea, heart arrhythmias and an increased risk of bacterial infection.

The new technology is a small, wearable device called a pupillometer that can hang on a pair of eyeglasses and only weighs 78 grams, slightly heavier than Google Glass. Developed by a team at National Taiwan University Hospital, Hsin Chu branch and National Chiao-Tung University, the device is designed to be worn for a half hour or so in the doctor's office, during which time it would monitor a person's pupils. By carefully measuring five parameters associated with the pupils, doctors may then be able to detect the earliest signs of diabetic autonomic neuropathy.

Detecting someone's asymptomatic diabetic autonomic neuropathy early and treating it properly may lead to far better health outcomes for them. Currently the condition is often not detected until moderate nerve damage and organ dysfunction are present.

"Currently doctors rely on observing changes in digestive speed, heart rate and blood pressure to detect diabetic autonomic neuropathy, but this limits their ability to make a diagnosis early on," said Mang Ou-Yang, who led the research with colleagues at National Chiao-Tung University. Now they have shown that monitoring the pupils of people with diabetes may be a better approach.

"Compared to the existing diagnostic techniques, the pupillometer is a more reliable, effective, portable and inexpensive solution for diagnosing diabetic autonomic neuropathy in its early stages," said Ou-Yang.

The pupil is useful for detecting diabetic autonomic neuropathy due to the neurological conditions caused by the disease. Like many organs, the eyes and pupil are dually innervated, receiving signals from both the parasympathetic and sympathetic divisions of the autonomic nervous system. These divisions control the pupil's circular and radial muscles, respectively.

The pupillometer, which is small enough to be mounted onto the front of a pair of glasses, works by emitting four colored lights to stimulate the pupil. A beam splitter attached to the device then filters the visible light that is reflected from the eye to the device's camera, which processes the images to analyze the pupil's size.

The device measures 10 parameters related to pupil diameter and response time. Of those 10, the researchers found that five parameters were significantly different in people with diabetic autonomic neuropathy.

Ou-Yang says if clinical trials are successful, the pupillometer could be available by the end of the decade.

Future research for Ou-Yang and his lab includes scaling down the size of the device, expanding the device's capabilities to observe two pupils simultaneously and collecting more experimental results from diabetic patients.

More about The Optical Society at: www.osa.org