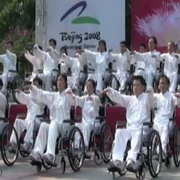 Wheelchair Tai Chi was presented
at the Paralympics 2008 in Peking;
© USF

An innovative 13-postures Tai Chi designed for wheelchair users has brought the traditional Chinese martial and healing arts to people with ambulatory impairment, thanks to the technology and program developed by Zibin Guo of the University of Tennessee Chattanooga.

"Too often, social and cultural barriers discourage people with physical disabilities from participating in fitness activities," said Guo, who collaborated with the China Disabled People's Federation and the 2008 Beijing Paralympics Committee to introduce the Tai Chi Wheelchair at the 2008 Beijing Olympics/Paralympics Cultural Festival. "Wheelchair Tai Chi can be practiced seated for those needing simple, low-impact, upper-body exercise by integrating wheelchair motion with the gentle, dynamic flowing movements of Tai Chi. It lifts the spirit and give practitioners a sense of command of space."

Tai Chi (Taijiquan) has been part of Chinese traditional medicine for thousands of years, but has not been an accessible form of martial arts, therapy or exercise for those with disabilities. Guo estimates that 83 million people in China are living with disabilities, particularly those disabilities that limit mobility. Most of the 83 million live in rural China where "social and economic development lags behind urban areas," he said.

"Studies conducted in China and elsewhere suggest that these individuals, and especially wheelchair users, have significantly lower self-esteem and are more vulnerable to depression," explained Guo. "The rationale behind developing Wheelchair Tai Chi as a fitness and recreational alternative for people with ambulatory impairment was first based on the documented benefits of Tai Chi in terms of health, accessibility, low cost and acceptance in the popular culture. Second, it was based on the perceived benefits for health and fitness that a modified Tai Chi could have for people with ambulatory impairment."


- More about the University of South Florida (USF) at: www.usf.edu