When Teens with Autism Want to Drive 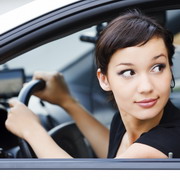 Many of the capabilities of teens
with HFASD come into play when
driving; © panthermedia.net/nobilior

In a study to investigate driving as it relates to teens with a high-functioning autism disorder (HFASD), child development and teen driving experts at The Children's Hospital of Philadelphia (CHOP) found that two-thirds of teenagers with HFASD who are of legal driving age in their state are currently driving or plan to drive.

A HFASD is characterised by subtle impairments in social interaction, communication, motor skills and coordination and by a difficulty in regulating emotions. Many of these capabilities come into play when driving.

"Little is known about how HFASDs affect a person's ability to drive safely," explained Patty Huang, paediatrician at CHOP. "Over the past decade, the rate of children diagnosed with an HFASD has increased, meaning that more of those kids are now approaching driving age. Car crashes are the number one cause of death for teenagers, so it is important that we understand how HFASDs impact driving and how to develop appropriate educational and evaluation tools."

In a first step to better understand the issue, researchers surveyed almost 300 parents of teens with HFASDs and discovered a few predictive characteristics among those teens who are likely to become drivers, including:

"It is very common for parents of kids with HFASDs to ask how they should handle learning to drive. Knowing these characteristics can help us prepare anticipatory guidance for families," said Huang. "In Pennsylvania, it is the law for teens to have a doctor's sign-off before they can get a learner's permit and that makes it easier to address driving-specific concerns. In states that do not have those laws, it is an issue that physicians should be prepared to address with their patients and their parents."


- More about the Children's Hospital of Philadelphia at: www.chop.edu