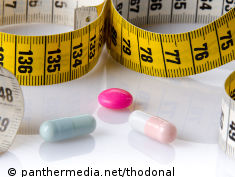 The study, published in The Journal of Neuroscience, describes a new way to affect hunger in the brain and helps to explain why people taking a class of drugs for type II diabetes gain more body fat.

Type II diabetes, the most common form of diabetes, affects 95 percent of diabetes sufferers. People with type I or type II diabetes have too much glucose, or sugar, in their blood. Type II diabetes develops most often in middle-aged and older adults and people who are overweight and inactive, according to the National Institute of Diabetes and Digestive and Kidney Diseases.

The research team found that sensors in the brain that detect free circulating energy and help use sugars are located on brain cells that control eating behavior. This is important because many people with type II diabetes are taking antidiabetics, known as thiazolidinediones (TZDs), which specifically activate these sensors, said Johnny Garretson, study author and doctoral student in the Neuroscience Institute and Center for Obesity Reversal at Georgia State.

The study found peroxisome proliferator-activated receptor &Upsih (PPAR&Upsih) sensors on hunger-stimulating cells, known as agouti-related protein (AgRP) cells, at the base of the brain in the hypothalamus. Activating these PPAR&Upsih sensors triggers food hoarding, food intake and the production of more AgRP. When AgRP cells are activated, animals become immediately hungry. These cells are so potent they will wake a rodent up from slumber to go eat, Garretson said.

TZDs help to treat insulin resistance, in which the body does not use insulin the way that it should. They help the body's insulin work properly, making blood glucose levels stay on target and allowing cells to get the energy they need, according to the National Institute of Diabetes and Digestive and Kidney Diseases.