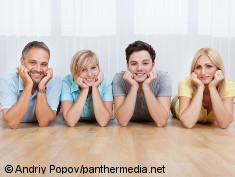 Judging whether a person seems "kinder" than another can be accomplished similarly in participants with or without ASD; © Andriy Popov/ panthermedia.net

The way people with autism spectrum disorder (ASD) gather information – not the judgement process itself – might explain why they gain different perceptions from peoples' faces, according to a new study from Hôpital Rivière-des-Prairies and the University of Montreal.

"The evaluation of an individual's face is a rapid process that influences our future relationship with the individual," said Baudouin Forgeot d'Arc, lead author of the study. "By studying these judgments, we wanted to better understand how people with ASD use facial features as cues. Do they need more cues to be able to make the same judgment?"

The study was conducted in collaboration with a team from the Hôpital Robert-Debré in Paris, who recruited 71 individuals, including a control group (n=38) and an ASD group (n=33), without intellectual disabilities. The group was divided into aged-matched subgroups: children (mean age 10 years) and adults (mean age 33 years). The researchers presented 36 pairs of photographic and synthetic images to the participants, and evaluated their social judgment by asking them to indicate which emotionally neutral faces appeared "kind" to them.

When photographic images of neutral faces were presented, the judgment of ASD participants was mixed compared to participants in the control group – the choices of the ASD participants were not predictable from one subject to another. However, the researchers found no difference between the groups when participants were presented with synthetic images, which were nevertheless created based on the characteristics of the photographic images previously shown. Moreover, when the synthetic image pairs contained less useful judgment clues (less pronounced facial features), the results for the two groups were influenced in the same way by this difficulty.

The identical results of the two groups when they viewed synthetic images suggest that it is not the judgment process itself that is different: judging whether a person seems "kinder" than another can be accomplished similarly in participants with or without ASD. However, the differences observed when they viewed photographic images suggest that the way they gather information about people's faces is critical.

"We now want to understand how the gathering of cues underpinning these judgments is different between people with or without ASD depending on whether they are viewing synthetic or photographic images. Ultimately, a better understanding of how people with ASD perceive and evaluate the social environment will allow us to better interact with them," said Forgeot d'Arc.

More about the University of Montreal at: www.umontreal.ca