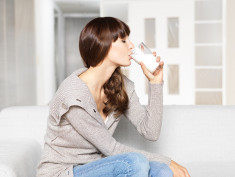 The findings indicate that women who frequently drink milk may reduce the progression of osteoarthritis;
© emperio/panthermedia.net

OA is a common, degenerative joint disease that causes pain and swelling of joints in the hand, hips, or knee. According to the Centers for Disease Control and Prevention (CDC), OA affects nearly 27 million Americans age 25 and older, with knee OA being more prevalent and severe in women. While medical evidence points to obesity, joint injury, and repetitive use from some sports as risk factors for incident knee OA, risks associated with OA progression remain unclear.

"Milk consumption plays an important role in bone health," explains lead author Bing Lu, from Brigham & Women's Hospital in Boston, Mass. "Our study is the largest study to investigate the impact of dairy intake in the progression of knee OA."

For the present study 2,148 participants (3,064 knees) with knee OA were recruited for the Osteoarthritis Initiative. At the start of the study dietary data was collected and joint space width was measured by x-ray to evaluate OA progression. Subjects included 888 men and 1,260 women who had follow-up at 12, 24, 36, and 48 months.

As the intake of milk increased from none to less than 3, 4 to 6, and more than 7 (8 oz) glasses per week, the joint space width in women also decreased by 0.38 mm, 0.29 mm, 0.29 mm and 0.26 mm, respectively. Results persisted even after adjusting for disease severity, body mass index (BMI) and dietary factors. No association between milk consumption and joint space width decrease was reported in men.

"Our findings indicate that women who frequently drink milk may reduce the progression of OA," concludes Lu. "Further study of milk intake and delay in OA progression are needed."

In a related editorial, Shivani Sahni, and Robert McLean, from Harvard-affiliated Hebrew SeniorLife Institute for Aging Research agree: "With the aging population and increase in life expectancy, there is an urgent need for effective methods to manage OA. The study by Lu et al. provides the first evidence that increasing fat-free or low-fat milk consumption may slow the progression of OA among women who are particularly burdened by OA of the knee, which can lead to functional disability."

More about Wiley at: www.wiley.com